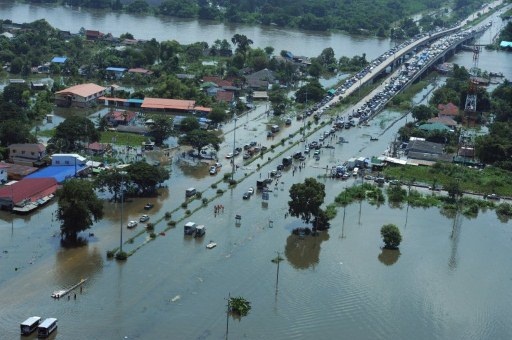 The Thai government is speeding up building dams, using a Bt350-billion budget, in this central province and also in Pathum Thani to protect the country’s economic zones, according to Deputy Prime Minister/Commerce Minister Kittiratt Na Ranong.

He spoke at a seminar on ‘New Post-Flood Investment steps’ after entrepreneurs in the two provinces were badly impacted by last year’s flood.

He noted the Cabinet agreed on a budget to build dams surrounding six industrial estates in Ayutthaya and Pathum Thani. The money will be distributed for dam construction within one to two weeks.

Mr Kittirate said that prevention measures and more infrastructure construction in the northern and upper central regions will help cope with the higher amount of rainfall and future floods.

Meanwhile, Board of Investment (BoI) Secretary-General Atchaka Sibunruang said the number of projects applying for investment promotions in the past five months reached 817 in the two provinces with a total investment value of Bt370 billion.

via Gov’t to speed up building dam to protect economic zones.