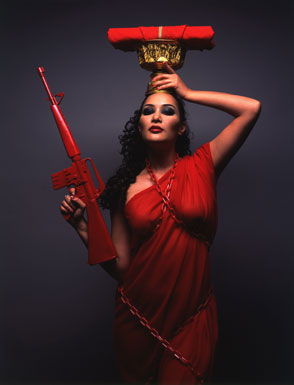 Manit Sriwanichpoom’s latest photographic exhibition is a double project featuring “Holy Machismo” and “Obscene”. If I was a Thai censor, or a Thai MP, I would certainly classify Manit’s work in the disturbing or controversial category, and possibly try to silence him.

But Manit’s approach is probably to subtle to appear on the censorship radar. Obscene (2012) are Baroque nudes. These Caravaggesque, charged and saturated color photographs confront the garish vulgarity of present-day Thai politics: administrations, drunk on power, trumpet ideals of democracy while painting themselves as self-sacrificing heroes, defenders of freedom, and harbingers of ‘justice’ to our benighted country.

Manit says that this series reflects a newly 50 year old man’s creeping sexual insecurity as he contemplates his balding head.

Both series are essentially linked by the artist’s interest in masculine (yang) vices of greed and lust.

H Gallery Bangkok is very pleased to announce the latest exhibition by one of Thailand’s most internationally acclaimed artists. Obscene is a showcase of two new series of photographs, Holy Machismo and Obscene.

His works are collected by the Maison Europeenne de la Photographie (Paris), the DG Bank (Germany), the Fukuoka Asian Art Museum (Japan), the Queensland Art Gallery (Australia), the Singapore Art Museum and well known private collectors. In 2002 he was picked as one of the world’s 100 most interesting emerging photographers by Phaidon Press in their book BLINK. In 2007 he was awarded the Higashikawa Overseas Photographer Prize from Japan.