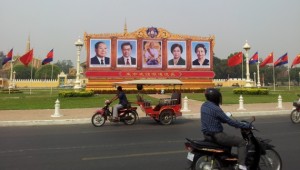 Photo: Alfred Meier Safe inside his armored motorcade and surrounded by nearly two dozen police motorcycle escorts, Chinese Premier Hu Jintao traversed north along Sothearos Boulevard in Phnom Penh this past Saturday morning, passing a 20 foot portrait of his face as well as one of his wife’s as his entourage made its way towards the Peace Palace for a meeting with Cambodian Prime Minister Hun Sen. Along the two sides of the road lined school children waving Cambodian and Chinese flags and holding up smaller frames of the aforementioned portraits. The meeting of the two leaders took place just two short days before the 20th annual ASEAN Summit in Cambodia’s capital city. One does not need much of an imagination to figure out what was being discussed. Cambodia is China’s closest ally in Southeast Asia, a special relationship which dates back decades and which has begun to ruffle the feathers of some of Phnom Penh’s ASEAN neighbors.  As chair of the regional bloc for 2012, Cambodia was in charge of setting the agenda for the conference. One issue of particular note which was omitted was the row over the Spratly Islands in the South China Sea. Photo: Reuters As I noted a few days ago in my preliminary commentary of the summit, China is one of six countries laying claim to the island chain, believed to be rich in oil and natural gas deposits. Four ASEAN member states – Vietnam, the Philippines, Malaysia, and Brunei – also claim the islands. Moreover, there has been increased hostility within the past year between China and Vietnam and the Philippines in particular, incidents which have triggered some parties to the dispute to call for the drafting of a Code of Conduct (COC). During an impassioned opening speech, Hun Sen called for greater unity amongst ASEAN member states, specifying the need to expand the regional currency fund and for better protection for migrant workers.  There was no mention of the Sea dispute. But that all changed when ASEAN Secretary-General Surin Pitsuwan of Thailand announced that China could also see a role in helping to draft the COC. That announcement was blasted by Philippine Foreign Secretary Albert del Rosario who said such a decision represented a “big disagreement.” Before you knew it, the South China Sea dispute became the central topic of discussion at the conference, much to the chagrin of Hun Sen who sought to avoid the topic altogether. It is an issue which should continue to dominate the discourse of regional relations with China indefinitely until there is a version of a COC drawn up. Privately and anonymously, some delegates told me that they believe Cambodia values its close ties to Beijing more than they do to ASEAN, and they are not happy about that. So much for greater unity.

China and Cambodia: A Love Story