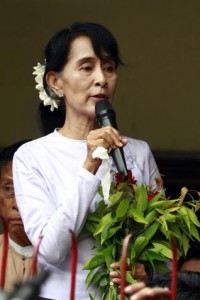 Photo: AP After campaigning tirelessly throughout the majority of her adult life in hopes of bringing democracy to her country and after spending nearly fifteen of those years under house arrest for espousing her views, Aung San Suu Kyi, Burma’s icon of hope and political freedom, has unofficially won a seat in the country’s parliament. An official declaration by the state-run election commission is not expected for days, or perhaps weeks. However, early tallies suggest Suu Kyi has secured at least 65% of the vote in her constituency, Kawhmu, located in her extremely impoverished home village of Wa Thin Kha. “It is not so much our triumph as a triumph of the people who have decided that they have to be involved in the political process in this country,” she announced to cheering supporters. “We hope this will be the beginning of a new era.” Her victory is a stunning, albeit unsurprising development for the long-isolated country whose economy has been crippled by Western sanctions which were implemented in response to the ruling junta’s egregious human rights record. International observers, including two delegates from the United States, were present in the country to monitor the electoral process to ensure its transparency. At this point, they are still evaluating the process and have not made a statement yet. In 2010, the military junta gave way to a nominally civilian controlled government. It was a dubious transition, as most of the ruling generals simply retired from military life to take up posts as politicians. Those elections were boycotted by Suu Kyi’s party, the National League for Democracy (NLD) and resulted in a dominant majority for the Union Solidarity and Development Party (USDP), the military-turned-civilian caucus. If the by-elections are judged to be free and fair by independent observers, some sanctions may begin to be lifted, a cause for celebration amongst business investors who have eyed the potential economic benefits which Myanmar may possess with increasing vigor and anticipation. “Burma is considered to be the last frontier in Asia,” according to Son Visel, owner of various textile manufacturing plants from China and Cambodia, to Thailand and Indonesia. “Think about it: Burma is a fertile plain virtually untouched by any type of Western or Eastern styled development. There are extraordinary profits to be had.” Speaking to a variety of investors and diplomats in attendance at the 20th Annual ASEAN Summit in Phnom Penh, Cambodia this week, one gets a sense that the “Race for Burma” is almost a modern day Age of Exploration for the globalized world. Myanmar is a country which has barred any sort of outside influence whatsoever, including international aid agencies after the devastating Cyclone Nagris which killed more than 130,000 people hit the country in 2008. One certain thing is that Aung San Suu Kyi’s victory will be hailed by all parties: the NLD, the West, and Myanmar President Thein Sein, who has emerged as the Burmese F. W. de Klerk to Suu Kyi’s Nelson Mandela. He, in effect, needed Suu Kyi to win to satisfy skeptics. However, the NLD’s success in these by-elections is not likely to result in much immediate political action. The NLD are the main opposition and represent only a fraction of the 644 seats in the Burmese parliament, even if they swept the 45 seats up for grabs in the by-elections. The next national elections, preliminarily scheduled for 2015, could see Suu Kyi run for President. At that point, Thein Sein’s tune may have changed a bit. Once her win is officially declared, the question will turn to how she will lead her party and turn her country’s hope into reality. Once he became President of South Africa, Nelson Mandela did not achieve the success many came to expect of him. Indeed, Suu Kyi’s victory “could create exaggerated expectations about the pace and scope of change,” says Carl Thayer, Emeritus Professor with the University of New South Wales in Australia in a recent piece in The Diplomat. Additionally, there will be a debate about whether the NLD’s greatest chance for success and national reconciliation will be to cooperate with the ruling USDP, thus legitimizing their regime even more. Or, in contrast, become the voice of opposition, much like how the Republicans in the House of Representatives in the United States have behaved during the second half of President Barack Obama’s first term. It all makes for great political theatre, but Suu Kyi’s constituents in Kawhmu still do not have running water, electricity, or proper sanitation. It is always important to remain cognizant of the human element in such political dogfights. Will Suu Kyi’s victory change the lot for these impoverished people? That remains to be seen.