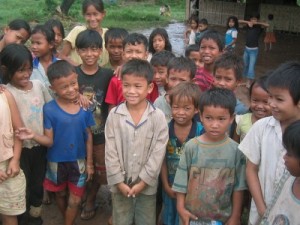 Photo: The Diplomat Magazine “Let me tell you, it hurts. It hurts bad,” remarks Johnny Phillips, elucidating the emotional and sometimes physical pain extracting yet another $1000 from an ATM in Phnom Penh can cause. Mr. Phillips is the founder of BuckHunger, a nonprofit organization which seeks to provide free food to Cambodian children whilst also teaching the kids the requisite skills needed to become employable in the food service industry. The children learn about food preparation, sanitation, and the various duties and responsibilities that restaurant workers have. Most importantly, 200 kids leave BuckHunger’s building every afternoon with their bellies full after a hot and healthy lunch. It’s a story that dates back to the era of colonialism: rich foreigners swooping into the less than developed parts of the globe to save the world’s poor. But there’s a problem here. Mr. Phillips is not rich; his organization survives on donations alone, and that is an area of trifling frustration, according to him. In fact, it is nearing the point where Mr. Phillips, who resides in Cambodia off of his savings – which he built up over 40 years as a food service professional, mainly in Tulsa, Oklahoma – and social security, may be so far in the red as to be unable to afford a plane ticket back to America. In a way, this is not too surprising of a development. In an article I penned for The Diplomat Magazine a few months ago, I argued that civil society in Cambodia has both constitutive and normative effects on how we, as a global community, view the North-South relationship. On the one hand, I think Western institutions are truly needed in this area of the world. Sometimes individuals in the Global South need some assistance in order to actualize their full potential. On the other hand, many of these institutions become victims themselves, thanks to their own benevolence. NGOs get so caught up in pie charts, power point presentations, and financial issues, the people they are actually supposed to be helping become benignly neglected. BuckHunger, for its part, is not an NGO; it is not registered with the Cambodian government and has a business plan that is not designed to make a profit. But it is not supposed to bleed money either, save for perhaps the necessary startup costs. But what Mr. Phillips does do, and what makes him unique, is that he does not simply give a handout to poor kids and then retreats back to his laptop to analyze that day’s quantitative statistics. He also provides a skill for the children, an inimitable characteristic that separates his organization from the typical one I referenced above. Indeed, this is something that is lacking in this country. Take, for example, the issue of bar girls. I blogged a few weeks ago for FPA about the situation of women who choose to go into this profession (an article which was highly popular and much criticized on this website, I might add). A few months ago, the police raided one of the hostess bars because prostitution is technically illegal in Cambodia. The bar owners apparently could not pay off the cops to their satisfaction, so the bar was shut down. What happened to the girls? Well, they either went to another bar, or returned home or to the streets without another job. I do not condone prostitution, but if the police are going to close down a hostess bar, the government should at least provide a program to reintegrate the women back into society with a new skill. Provide English classes, teach them how to take an order at a restaurant, demonstrate how to make a mixed drink. They should do something, because while they have closed down one den of iniquity, there are myriad others and the only thing accomplished is that they have driven the girls out of a job. It will be a sad day if an organization like BuckHunger has to shut their doors. Just today, Mr. Phillips indicated that he had to close the building’s doors for the first time for austerity measures. He said there would be 200 children knocking on the door this afternoon expecting a hot meal who will be turned away. Instead, they will have to beg or pick through garbage which, incidentally, is another topic which I have discussed on this website. It is just one organization, and it is only 200 kids and seniors a day in a nation where 30% of the population lives on less than $2/day, but it is still a cause worth saving, running in contrast with my normal discourse and sentiment on Cambodian civil society. If you would like to make a 501c3 tax deductible donation, you can do so through the BuckHunger website.

Teach a Kid to Cook, Feed Him for Life