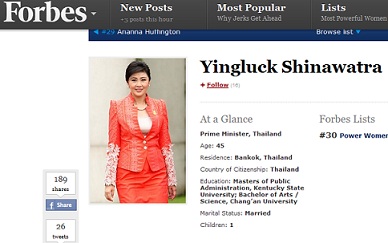 Thai Prime Minister Yingluck Shinawatra is ranked the 30th most powerful woman in the world by Forbes magazine in its list of the 100 influencial women, which was topped by German Chancellor Angela Merkel.

Ms Yingluck, 45, is only Thai woman ever named to the ‘World’s 100 Most Powerful Women’ list. Released by Forbes on Wednesday, Thailand’s first female prime minister ranked 59th last year, her first entry into the list.

Forbes said that one year into her term, Ms Yingluck’s ruling party has had a tumultuous summer. In July the Constitutional Court dismissed a complaint that her party’s attempt to amend the constitution amounted to plotting to overthrow the monarchy.