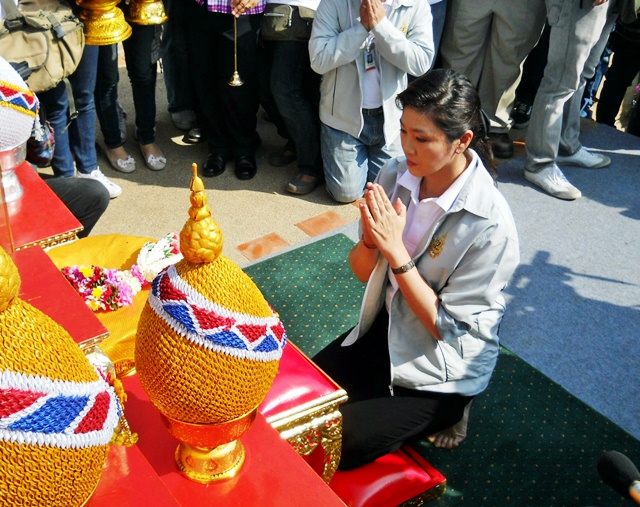 About a year ago very few people in Thailand new anything about Thaksin youngest sister. And when he decided to appoint her as the official candidate of his party for the soon to be general elections, most observers did not believe that she could possibly fit the job as a prime minister.

But it turned out that she became the first female Thailand Prime Minister elected after an overwhelming victory in the poll. Today the government of Thai Prime Minister Yingluck Shinawatra has marked one year in office with little fanfare.

It has a clear electoral mandate and a large coalition majority in government but its policy directions have been hesitant and haphazard, destabilized and hemmed in by conservative forces arrayed against her exiled brother Thaksin Shinawatra, who ruled from 2001 to 2006 before his ouster by a military coup.

Yingluck’s immediate task ahead is to hold the ground, generate policy thrust and promote a compromise that will allow Thailand to move ahead.

After taking office a year ago on the back of a resounding majority in last year’s July elections, which returned 265 out of 500 MPs for her Pheu Thai Party, Yingluck faced the external shock of Thailand’s devastating floods for the remainder of last year.

She weathered the flood crisis through personal grit and diligence

in the face of government infighting and inter-agency conflicts.

While the floods shaved economic growth to just 0.1 per cent last year, Yingluck emerged early this year in a stronger and more confident position.

But these policies were glacial and patchy in implementation.

Yingluck was unable to personally explain and steer policy directions. Her ministers were also ineffectual in marketing and shepherding these policies. It seemed as if the Yingluck government merely wanted to recreate the populist magic her brother’s government enjoyed spectacularly a decade ago. Policy wherewithal was later stymied by Pheu Thai Party’s moves to amend the Constitution and ram through a reconciliation Bill.

These moves elicited virulent responses, from anti-Thaksin groups in the Democrat Party and appointed senators in Parliament to the yellow- and multi-color shirts in the streets and segments of civil society in the media and universities. The Constitutional Court intervened and effectively put a stop to charter change and expedient reconciliation. It can be seen as a signal from Thailand’s powers-that-be that there can be an uneasy truce around Yingluck but no compromise to bring back Thaksin.

via Thailand’s Yingluck Govt, One Year On | The Jakarta Globe.