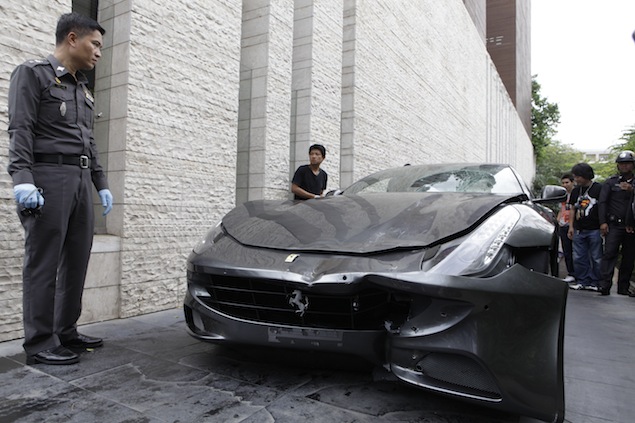 The billionaire family of a Red Bull energy drink heir accused of killing a police officer in a hit-and-run accident paid the officer’s siblings 3 million baht in a deal aimed at avoiding a civil lawsuit, police said Wednesday.

Beware if you come to Thailand to get high on cocaine and trash police officers driving fancy sports cars: this deal does not include the damages to your car, which can cost you more, especially  if you drive a Ferrari.

Vorayuth Yoovidhya, 27, is charged with driving a Ferrari that struck the officer and dragged his body down a Bangkok street earlier this month.The Yoovidhya family paid the officer’s siblings 3 million baht $97,000 last week, police Lt. Col. Viradon Thubthimdee said. He said the settlement will protect Vorayuth from a civil lawsuit.”We sometimes call this a `funeral fee.’ If the victim’s party is satisfied with the amount of money, then they will not seek compensation through a court,” Viradon said.