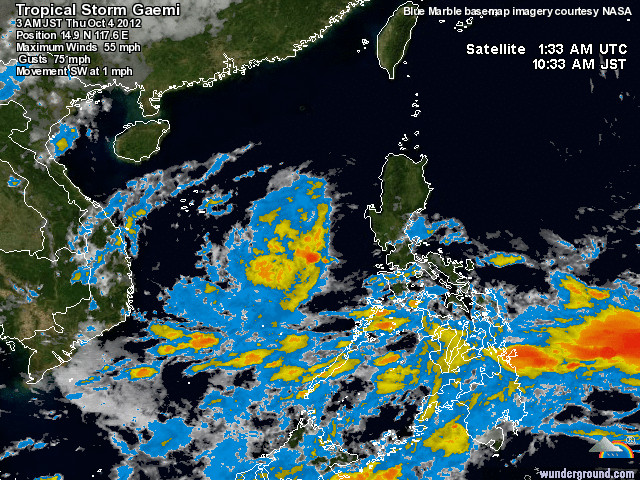 Disaster-prone provinces likely to be impacted by tropical storm Gaemi, particularly Thailand’s lower Northeast and Eastern region, have been instructed to be on full alert for possible flash floods, landslides and forest flooding, according to a senior official.

Chatchai Promlert, director general of the Disaster Prevention and Mitigation Department (DPM), said the authorities have been told to prepare flood-relief equipment to promptly and efficiently help people if needed.

Storm Gaemi is due to hit Thailand next weekend, arriving from South China sea through Vietnam. Picture: wunderground.com

The Water and Natural Disaster Management Committee will hold a meeting with governors of eastern provinces today (Thursday) to work out flood response preparations, he said.

Climate change, canal encroachment and urban expansion could be also blamed for the flooding in Bangkok this year, Dr Sucharit said.

The government has set aside 20 billion baht to improve the drainage system and create water retention areas in Bangkok. However, Dr Sucharit said only 50% of the work has been done.

In Bangkok, he added, the DPM will cooperate with agencies concerned including the Bangkok Metropolitan Administration in sharing information for joint anti-flood operations.

Thailand’s Meteorological Department issued its 12th warning on Gaemi as of 5am today, that the storm is in mid-South China Sea, centred some 920km east of Da Nang, Vietnam and moving west slowly.

The storm will strengthen and will make landfall over central Vietnam on Saturday, and then move across the lower Northeast and Central Thailand.

Flooding is likely as tropical storm Gaemi hits central Thailand this weekend, but the problem in Bangkok will not be severe, water engineering experts from Chulalongkorn University say.

Sucharit Koontanakulvong, an expert from the department of water resources engineering at Chulalongkorn University, said the approximate flood level would be 20cm.

The storm would bring with it heavy rainfall, Dr Sucharit said.