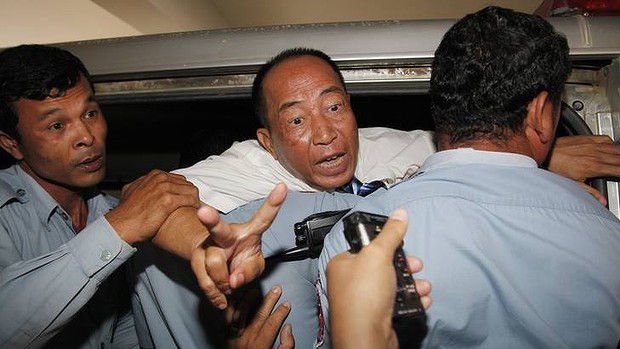 Independent radio host Mam Sonando was sentenced to 20 years in prison for allegedly inciting a secession movement. Photo: Reuters Over the past weeks and months, in the shadows of other, more prominent global events, and with the world’s attention focused on other places, Cambodia has ceased being a democracy. If that statement sounds exaggerated, allow me to recap some of the more infamous shenanigans which have turned this former war torn nation into a modern day banana republic. Last January, just as I was arriving in Cambodia, I observed hundreds of people in a very poor district in the capital city of Phnom Penh being kicked out of their homes without compensation. At the time, I wrote this for Dissent Magazine: Approximately seventy people sat outside the U.S. Embassy in Phnom Penh last week in the sweltering heat because, quite frankly, they had nowhere else to go. They were members of some 300 families who were forcibly evicted from their homes in Phnom Penh’s Borei Keila district on January 3. Their homes were bulldozed to make way for corporate development. Land grabbing has been a hallmark of Prime Minister Hun Sen’s administration over the years. In July, a major Russian rubber corporation, Casotim, seeking to exploit a potential wealthy stretch of land in Kratie province, became embroiled in a dispute with local villagers. Shortly after, police raided the commune, resulting in the shooting death of a 14-year old girl; witnesses say the young girl was cowering in her house when she was shot. One man who is an outspoken critic of this practice is Mam Sonando, an independent radio host. He was arrested in the days following the police raid in Kratie and was charged with inciting a secessionist rebellion against Hun Sen’s government. On Monday, he was sentenced to 20 years in prison. Mr. Sonando is currently 70-years old and reportedly suffers from a number of medical problems. International condemnation of the farcical conviction was swift. Amnesty International called it “shocking and baseless,” adding that no evidence was produced against Mr. Sonando at his trial. The U.S. embassy released its typical bland statement about “being concerned” but did call for the activist’s immediate release. On a related topic, the issue of logging has led to some gruesome ends for two environmental activists. I covered the death of Chut Wutty for The Diplomat Magazine in April and May. He was shot in Koh Kong Province after he refused to hand over his camera’s memory stick to a military policeman. The policeman than allegedly killed himself, and the whole thing was to be investigated. To this point, nothing has been done except to attempt to sweep the whole bloody affair under the carpet. Then, just last month, another journalist who highlighted the government’s corruption and negligence with respect to the logging issue was found hacked to death with an axe and stuffed into the trunk of his car. In his last article, Hang Serei Oudom of the Vorakchun Khmer Daily newspaper had “accused the son of a military police commander of smuggling logs in military-plated vehicles and extorting money from people who were legally transporting wood.” When activists and journalists who call out the political and economic leaders of a country are either thrown in prison or murdered, that is not democracy. Readers might react unsurprised if this were a story about Iran, North Korea, or perhaps some South American countries where outspoken individuals have a proclivity for simply disappearing.  Now, you won’t be shocked the next time this happens in Cambodia. Did I mention that I’m writing this post from my apartment in Phnom Penh? If you don’t hear from me in awhile, perhaps you should assume the worst.