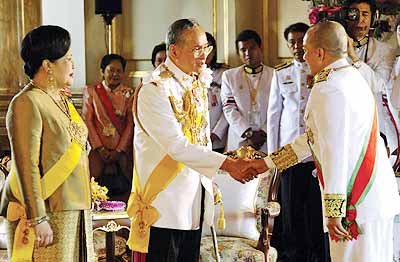 “In life, men are either kings or pawns.”  -Napoleon Bonaparte Not to underestimate the cult of personality which Cambodia’s late King Father Norodom Sihanouk engendered, approximately one million people reminded us of his revered presence in the country by lining the streets from Pochentong International Airport all the way to the Royal Palace on Wednesday as his body was flown in from China.

People, young and old alike, openly wept at his memorial while others speculated on message boards if the country would now spin out of country without any checks on Prime Minister Hun Sen. And all of this due to the death of an absentee, aged figurehead who held virtually no political clout for years and whose overthrow in 1970 was met with jubilation amongst the educated segment of the country.

Photo: Bureau of the Royal Household “In life, men are either kings or pawns.” -Napoleon Bonaparte

The pomp and circumstance may very well be an elaborate show conducted by Mr. Hun Sen in an effort to sure up his nationalistic credentials for next year’s election. The Prime Minister, whose clashes with the royal family over the years are well-documented, accompanied Sihanouk’s son — the inconsequential King Norodom Sihamoni — to Beijing to retrieve the body and declared a week of mourning.

Hun Sen’s ability to silence dissent, outmaneuver his opponents, and maintain and ironclad grip on power for more than two decades has shown to be a masterclass in political duplicity. He has diligently erased the royal family from any type of serious relevance beyond the traditional role the monarchy plays in Cambodia’s affairs.