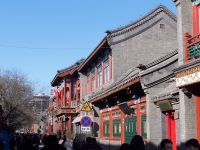 According to local real estate consulting agencies, upscale housing in the Chinese capital has seen a sharp increase in sales in November, driven by appetite from foreign buyers and relatively cheap loans.

Four hundred and twelve units of high-end houses, mainly villas priced at about RMB50,000 (US$7,948) per square metre, were sold in November, up 52% year-on-year and 84.8% month-on-month, according to Beijing-based Yahao Real Estate. This marks the sector’s largest sales volume in Beijing since April 2010.

In addition, total turnover amounted to RMB3.5 billion (US$477 million), up 47.3% from last year, according to a private research centre.

Motivated by the good results, many developers are mulling a markup of prices by upgrading their new houses, especially those around prime sites, said many industry insiders.

Beijing is one of the first Chinese cities that imposed a raft of measures to rein in housing prices since April 2012. The Chinese government has repeatedly reiterated its stance on controlling its red-hot property market, and vowed to keep measures in place.

But despite the restrictive measures and this year’s grim economic conditions, the country’s overall real estate market is showing signs of recovery. And luxury housing attracted particularly strong demand because enterprises tend to make safer investments and put their money into villas that hold value, as the real economy is taking the brunt of a global slowdown, said a deputy manager from Yahao Real Estate.