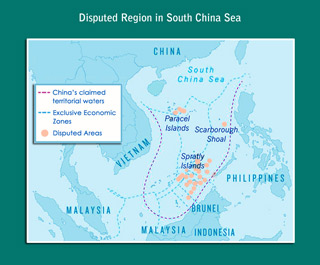 China battles Japan for the Diaoyu/Senkakku Islands and ASEAN members for large sections of the South China Sea. Settling disputes quickly is in the interest of all claimants, particularly those with less technological expertise, suggests Will Hickey of SolBridge University. Rapid drilling can cause oil to migrate within a reserve, and horizontal drilling for several kilometers is also possible.

Countries with sophisticated technology collect product more quickly. Hickey urges countries to rely on unitization – devising agreements to divide shares, map boundaries, administer operations and collect revenues. “Unitization is usually undertaken to achieve the most efficient and economical exploitation of reserves to benefit all parties,” he explains. Surface boundaries are left intact, thus eliminating the contentious issue of sovereignty. Hickey lists several models of unitization, including a partnerships between the US and Mexico. Of course, the devil is in details, and the stronger contestants have least incentive to compromise or share. – YaleGlobal