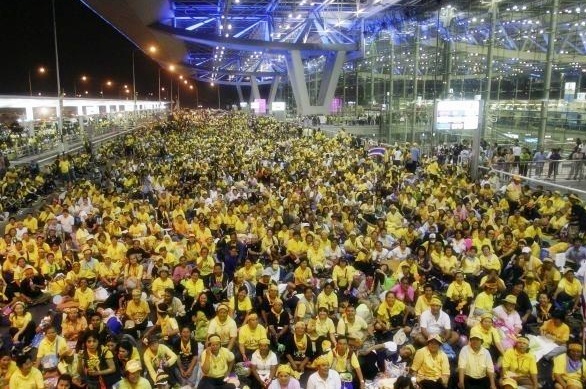 Thai prosecutors today indicted six co-leaders of the Peoples Alliance for Democracy PAD, known as Yellow Shirts, for leading their protesters in an intrusion of the Government House compound during anti-government demonstrations in 2008.

All were indicted for leading PAD protesters to seize the Government House compound in their month-long campaign to topple the Samak Sundaravej and Somchai Wongsawat administration in 2008.Another case involved the accusation that 20 PAD Yellow Shirt activists led the blockade of the Parliament by the movement in October 2008.

On September 19th 2006 then Prime Minister Thaksin was overthrown in a bloodless coup by the Thai military that was largely greeted with jubilation by the country’s middle-class and traditional elite.  Although there is a long history of direct intervention in Thai politics, this was the first time since 1992 that the country had experienced a coup d’etat.

The coup occurred following street demonstrations by anti-Thaksin protestors, dubbed the ‘Yellow Shirts’ because they wore yellow signifying their loyalty to the Crown, that had resulted in a contested election which while won by Thaksin’s political party the Thai Rak Thai (Thais Love Thais) had been boycotted by most of the opposition parties. The coup consequently aimed to ‘save democracy’ by ending the stand-off between Thaksin and the protestors.

The coup however failed to settle the ‘problem of Thaksin’. Having forced Thaksin into exile and then dissolving his political party, the coup leaders failed to recognize the underlying and continuing support for much of what he stood for among the electorate. Consequently, much to the chagrin of the coup leaders and the Yellow shirts, the first post-coup election of December 2007 was won by the successor to the TRT, the Peoples Power Party. While the PPP refused to succumb to continuing and intensifying protests by the Yellow Shirts throughout 2008, Thailand’s Constitutional Court again intervened dissolving the PPP for electoral fraud enabling the opposition and pro-establishment Democrat party took office.