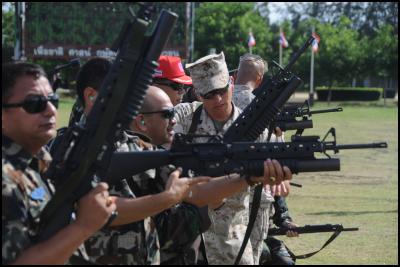 He said details of the intelligence report were delivered to the Fifth Region Police Commander Suthep Dejraksa last week so that he will closely monitor the situation.

Security has been strengthened in Chiang Mai following warnings of a planned terrorist attack against the US Consulate, Prime Minister Yingluck Shinawatra said yesterday.

“The United States has not requested extra measures but Thailand will take every precaution,” she said.

Cobra Gold 13, which involves troops from the US, Thailand and allied countries on exercises in Thailand, began yesterday and continues through Feb 21. Picture: U.S. Air Force Master Sgt. Cohen Young,

In Bangkok, US Embassy spokesman Walter Braunohler said the consulate remained open for business but said precautions will be taken to protect US facilities.

“We continue to take every precaution to protect our facility – whether it’s in Bangkok, Chiang Mai or worldwide – our employees and our visitors,” Braunohler told Associated Press.

An untoward incident would have a negative impact on national security, he said, adding that the alert will continue until the joint Thai-US military exercise, code-named Cobra Gold 13, is finished.

Mr Chalerm gave assurances that the reinforcements at the US consulate will not jeopardise a trip by Prime Minister Yingluck Shinawatra to the northern region later this week.

It was reported that the security unit at the American consulate has contacted provincial authorities seeking round-the-clock protection.

He said he has learned that some of the group members left the country and only a few remain in Thailand, under the close watch of the Thai authorities. An arrest could not be made since they did not commit any crime, he explained.

Prime Minister Yingluck Shinawatra has been notified about the matter and she has instructed agencies concerned to tighten security, according to Mr Chalerm.

Over 30 insurgents dressed in camouflage-like security force uniforms with white neckerchiefs attacked a military base in the southern border province of Narathiwat but in the melee, 19 attackers were killed and no casualties were reported on the government side.

19 insurgents killed in military base attack

Some 30 assailants arrived on pickup trucks firing at the 2nd rifle unit of Narathiwat special force in Narathiwat’s Bacho district at about 1am on Wednesday morning.

Meanwhile, another group of insurgents felled trees to block the road, threw spikes and placed bomb booby traps on the road to prevent reinforcement from outside to help the unit.The another group raided the military base and exchanges of gunfire were heard periodically.

After the fighting eased, government personnel inspected the scene and found at least 19 of the attackers were shot dead. Sixteen M16 assault rifles and a handgun were seized as well as two of the attackers pickup trucks.

The authorities said that they found documents planning this attack when they killed Suhaidi Dahay, a leading local insurgent last Saturday, so they were prepared, and on high alert for the attack.