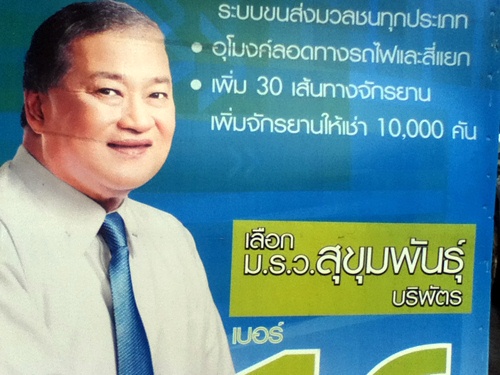 Number 9, although a sure bet  in Thai lucky numbers, was not enough to bring Pongsapat in the governor seat of the Thai capital. Many Bangkokians, although not very happy with Sukhumbkand previous mandate, were probably worried that a Pongsapat victory  would benefit Thaksin, and reinforce the ruling Pheu Thai control on Thailand.

An unofficial result as of 8.08pm when 100 per cent of the vote tally was complete, Mr Sukhumbhand won 1,256,231 votes, followed by Gen Pongsapat with 1,077,899 votes, and former police chief Seripisut Temiyavej garnering 166,582 votes followed by 78,825 votes for Suharit Siamwalla, an independent candidate.

Bangkok Pundit provides an initial analysis of the voting numbers:

Praj Kiatpongsan observes the scene in the headquarters of the defeated party:

The atmosphere at the Pheu Thai party headquarters on Petchburi Road turned bitter as some supporters of Pongsapat angrily punched a TV screen, screamed profanity and pointed their fingers at the face of MR Sukhumbhand Partibatra, who was addressing a victory speech live from the Democrat Party headquarters.

Various polling agencies must now conduct some serious soul-searching and to revise their polling techniques which have now been proven seriously flawed. It would take quite a while before any trust in all those well-known polls could be restored. And they must admit that it’s unfair and unprofessional to blame it all on the respondents who have been accused of the pollsters of having “lied” to the volunteers seeking their views.

Bangkokians have spoken, and loudly so…with almost 64% voter turnout, much higher than the last election despite the downpours in certain constituencies this afternoon

Speaking at a press conference, Prime Minister Yingluck Shinawatra congratulated M.R. Sukhumbhand for his victory, and she pointed out that her government and Pheu Thai Party were ready to work seamlessly with the Bangkok Governor. Although the vote for Police General Pongsapat was not enough for him to serve as governor, she said that Pheu Thai was glad to continue to push for the implementation of policies it presented to the people.

Police General Pongsapat conceded defeat and said that he was ready to help Bangkok residents, although he did not win the election. He would discuss his future with Prime Minister Yingluck after she returned from an overseas trip. The Prime Minister is on a visit to Sweden, Belgium, and the European Union Headquarters from 4 to 7 March 2013.

Meanwhile, M.R. Sukhumbhand thanked the Prime Minister for pledging to work with him without a dividing line in order to move the city forward. He himself is also ready to work with the Government seamlessly, as well.

M.R. Sukhumbhand urged about 800,000 Bangkok residents who did not cast their votes for him at the election to help build Bangkok with him. He pledged to work harder and thanked Bangkok residents for trusting the Democrat Party to run the capital for 12 consecutive years.

Aged 60, M.R. Sukhumbhand was a lecturer at the Faculty of Political Science, Chulalongkorn University, from 1980 to 1993. He served as Deputy Foreign Minister from November 1997 to February 2001. He was first elected Bangkok Governor on 11 January 2009.