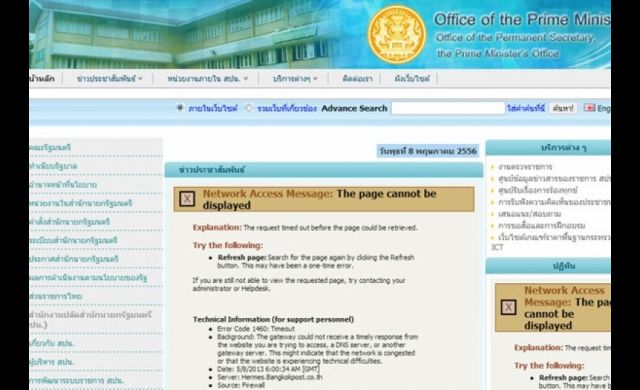 Thailand is no longer the longer the land of smiles, at least on the web and in the social media scene. Twitter and Facebook activist are ranting against Thai Prime minister and the official website of Thailand’s Office of the Prime Minister was hacked earlier this week. This all started in Mongolia at the seventh Ministerial Conference on International Democracies, where Yingluck Shinawatra denounced the 2006 coup and attacked independent organizations in Thailand. Her speech was admired by her supporters while being attacked by her opponents and critics.

This is the first time a Thai prime minister has sued a person for a post on social media.

The prime minister last week had her lawyers file a defamation suit against Thai Rath cartoonist Chai Rachawat, alleging he compared her to a prostitute in a Facebook post.

Chai, whose real name is Somchai Katanyutanan, posted pictures of Yingluck with a caption: “Please understand that prostitutes are not bad women. Prostitutes only sell their body, but a bad woman has been wandering around trying to sell the country.” However, Chai did not mention whom he meant on the post.

The suit charged Chai on three counts — insulting an official during an operation, defaming another person via publicity, and violating the Computer-Related Crime Act, which prohibits posting defamatory comments against others on the Internet.

Thai Prime minister was criticized by users via Twitter and Facebook when she explained the necessity for the government’s 2-trillion-baht (US$67 billion) borrowing bill, and for the delivery of fresh vegetables to the House of Representatives in March.

Twitter and Facebook have been filled with amusing messages and illustrations. They even dubbed Yingluck “Madam Fresh Veg.

Hackers on the path of war

The official website of Thailand’s Office of the Prime Minister was hacked with the name and title of Prime Minister Yingluck Shinawatra replaced with messages attacking the premier herself. Impolite messages written in English were posted by anonymous hackers identifying themselves only as “Unlimited Hack Team!!!”.

As of press time, the website www.opm.go.th cannot be accessed.

Information and Communication Technology ICT Minister Anudith Nakornthap dismissed the action as challenging the ministry’s move to close down any websites which posted what he termed as unfair online criticism of premier.Suranand Vejjajiva, the prime minister’s secretary, said the ICT ministry has been asked to close the website server, while an investigation is underway to track down the hacker.

“Legal action must be taken against the wrongdoers as the act is a breach of the Computer Crime Act,” he said.

The hacking occurred a day after Prime Minister Yingluck said people have the right and freedom to criticise the government’s policies but untrue accusations are unacceptable and the ICT must take action.