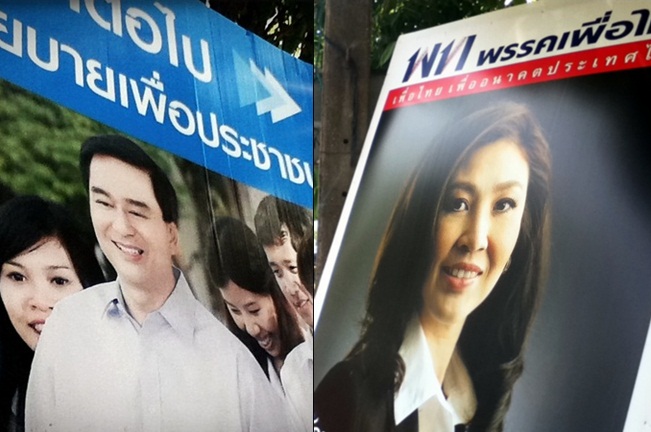 If there was an election today, Puea Thai would still win the race, but with a narrower majority : 41% instead of 48% for the 2011 elections, shows a Bangkok University Poll which surveyed 1,234 people throughout Thailand between June 18-20.

BP: This is a significant fall in support for Yingluck, but Abhisit hasn’t gained at Yingluck’s expense. In fact, support for Abhisit also declined albeit slightly. Yingluck is also now slightly less popular than her party (see Q2).

Q2: If today there was an election, which party would you vote for? (“หากวันนี้เป็นวันเลือกตั้ง ท่านจะเลือกพรรคใด”)

BP: The November 2012 figures were very similar to the 2011 election, but as you have seen support for Puea Thai has dropped by almost 8 points.  As with Abhisit, support for the Democrats has also dropped.

Q3: As of today, do you expect the Yingluck government will serve out the full term or not? (ณ วันนี้ ท่านคาดว่ารัฐบาลของ น.ส. ยิ่งลักษณ์ฯ จะทำงานครบวาระหรือไม่)

BP: Again, overall confidence in the government serving out the term has dropped, but it is a drop as opposed to people thinking the government is about to fall.

By profession:
15.9% contractors, 12.2% are farmers, 22.7% are traders/self-employed, 18.8% work for private enterprises, 10.7% are civil servants/state enterprise employees, 10.3% are housewives/househusbands/retired, 6.4% students, Others 2% didn’t specify a job/unemployed/freelance.

*The government already indicated last month that for the October 2013-September 2014 budget that the government will start to collect excise tax on diesel which will result in an extra 30 billion baht a year in revenue.