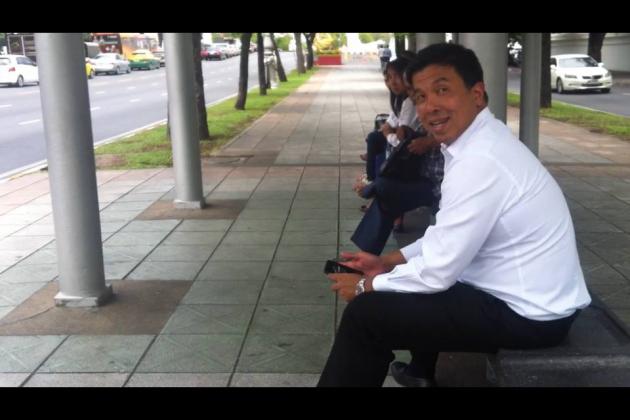 Nation’s editorialist Suthichai Yoon has a really refreshing story about Thailand’s transport minister boarding a bus (yes an ordinary smelly crowded bus)  trying to make it to the airport in time, and being stuck in Bangkok notorious traffic. Welcome in the real world Mr minister…

The minister wants the officials to have firsthand experience travelling by bus and report back to the ministry on all the problems encountered on the way.

He then tried to practise what he preached by attempting to catch a bus to Don Mueang Airport. And he discovered what every other ordinary commuter in Bangkok has experienced every working day.

According to reporters on the beat, at around 11am one day last week, having finished his duties at Government House, Minister Chadchat tried to catch the air-conditioned 509 bus. He had a flight to catch at the domestic airport. The minister did make allowance for the inconvenience of not travelling in his own sedan. He had spared two hours to get to the airport by bus.

Chadchat waited and waited at a bus stop outside the Education Ministry on Ratchadamnoen Avenue. About 40 minutes later, the bus arrived. The minister hopped on board, but it was a painfully slow trip. By about 12.20 he had got only a quarter of the way to the airport. He jumped off at the Victory Monument intersection to call his chauffeur-driven car to rush him to the airport. He didn’t want to miss the flight. After all, he is the transport minister.

via Minister takes the bus and nearly misses his flight – The Nation.