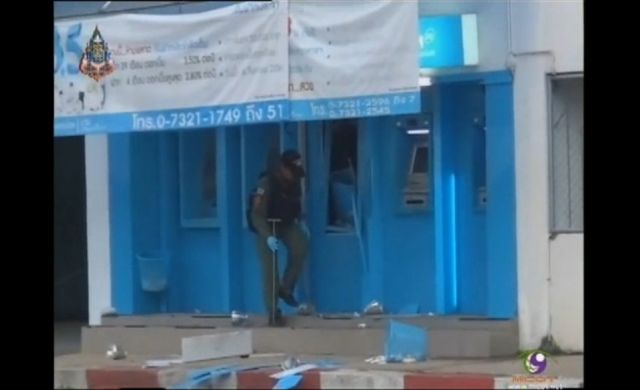 ATM booths in more than 20 locations in the four southernmost provinces were bombed early this morning with no injuries reported, but one teacher was shot dead as three teacher residences were torched.

Forensic experts and bomb squad teams inspected the scene at a ATM booth at a Yala municipality minimart after the machine was bombed by suspected insurgents. ATM booths at various banks including Krung Thai, the Islamic Bank, the Government Savings Bank and UOB were reported bombed concurrently across the provinces.

CCTVs in Yala’s Yaha district caught the images of  two suspects, a man and a woman on a motorcycle. Police were seeking to question them whether they were involved with the multiple attacks.

Seven ATM booths in Pattani were bombed including one near the governor’s residence. An army ranger base was attacked by gunmen, with one ranger wounded.

Waena Mudor, a teacher at Ban Jae Kreu Ya School, was shot dead at her home in Sai Buri district while three teacher dormitories were torched. A firetruck was burned and CCTV cameras at a Kapo district intersection were damaged.

via ATMs bombed at more than 20 locations in southern provinces | MCOT.net | MCOT.net.