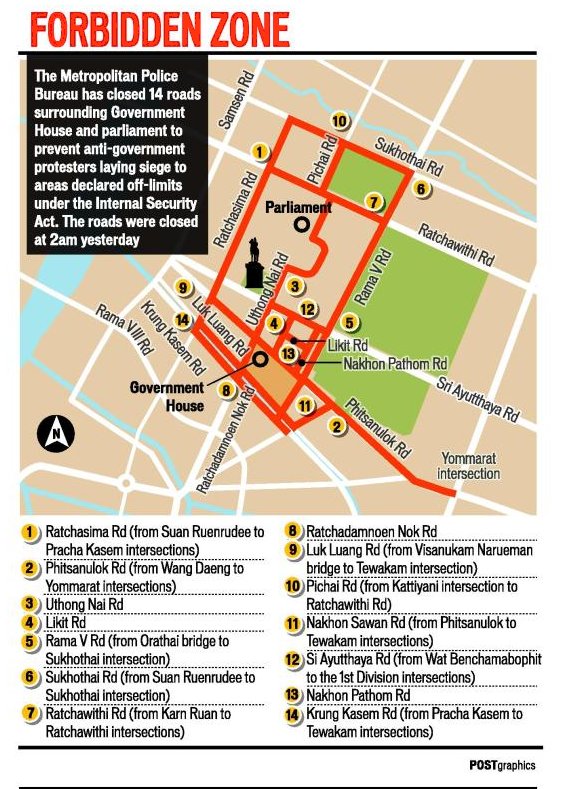 The Government has announced the use of the 2008 Internal Security Act in eight subdistricts of three districts in Bangkok, effective from 9 to 18 October 2013.

The announcement came after a special Cabinet meeting on 9 October 2013, chaired by Deputy Prime Minister Police General Pracha Promnog. It was made because an anti-government group, called the People’s Democratic Force to Overthrow Thaksinism, has been rallying in front of Government House.

The Secretary-General of the National Security Council of Thailand, Lieutenant General Paradorn Pattanatabut, said that the rally was likely to be protracted and it was feared that ill-intentioned people might interfere.

The group has reportedly asked 56 other groups to join the protest. This might pose a threat to national security. The Government has, therefore, decided to impose the Internal Security Act in the areas.

The Commissioner General of the Royal Thai Police, Police General Adul Saengsingkaew, serves as head of a peacekeeping center to handle the situation.

Police General Pracha has informed Prime Minister and Defense Minister Yingluck Shinawatra, who is attending the ASEAN Summit in Brunei Darussalam, about the situation. The Prime Minister stressed that every step taken by relevant officials must be within the bounds of the law.

via Inside Thailand — Internal Security Act Enforced in Three Districts of Bangkok.

Democrat leader Abhisit Vejjajiva Sunday called on the protesters and the government to refrain from violence.

He said respecting the laws can alleviate tension and prevent the situation from getting out of hand.