The Royal Thai Government has scheduled a Royal Cremation ceremony for His Majesty the late King Bhumibol Adulyadej, who passed away on October 13 last year, to be held during October 25 to 29, 2017 at the Sanam Luang Royal Ceremonial Ground in Bangkok. The actual cremation will take place on October 26, which has been declared a national public holiday to allow the public to participate and share in the nation’s mourning at the passing of our dearly beloved and revered monarch.

Most thai media websites and government organisations have now switched to a grey-scale layout and are displaying a black ribbon on their upper corner.

The Royal Cremation Ceremony Day, Oct 26, has been declared an official holiday, and shopping centres, cinemas, entertainment venues, the stock market, banks and financial institutions will be closed.

Various transport including the skytrain, MRT, Airport Rail Link, Bangkok Metropolitan Authority (BMA), Bus Rapid Transit (BRT) and ferries will offer free rides to facilitate mourners getting to and from the cremation site at Sanam Luang before and after the holiday. 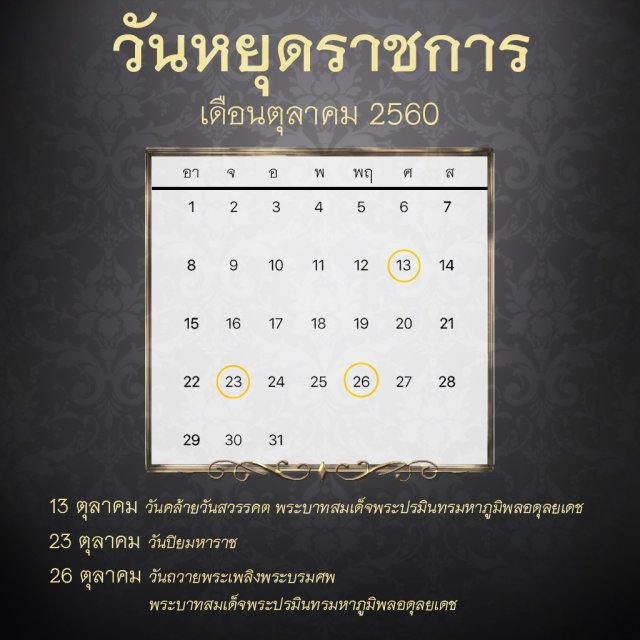 People will be able to use ATMs, but all commercial banks will be closed on Oct 26. Online channels and call centres will also be operating.

All commercial bank branches nationwide will be temporarily closed on Oct 26 to allow their employees to attend the ceremony.

However, online channels and call centres will be available to serve customers’ requirements for banking transactions and assistance.

Krungthai Bank (KTB) president Payong Srivanich said in a statement the bank will temporarily close all branches across the country on Oct 26 to allow staff to attend the ceremony. The bank will also hold an alms-giving ceremony in remembrance of His Majesty the King with 89 monks on Oct 27 at the bank’s headquarters.

Kasikornbank (KBank) will also temporarily close all its physical branches nationwide except the Wisdom service centre located at Suvarnabhumi airport. The KBank foreign exchange booth service will be available on that day.

Tesco Lotus is preparing for the early closure of all 1,900 stores nationwide on Oct 26 to allow staff to participate in the ceremony and pay their respects to the late King. All stores will resume normal operations the following day.

All Tesco Lotus stores will close at 2pm on Oct 26 to allow staff to leave early and take part in mourning activities.

Isetan Thailand, the operator of the Japanese department store on the Ratchaprasong intersection, announced on Facebook that the company will close its store on Oct 26 for the ceremony. 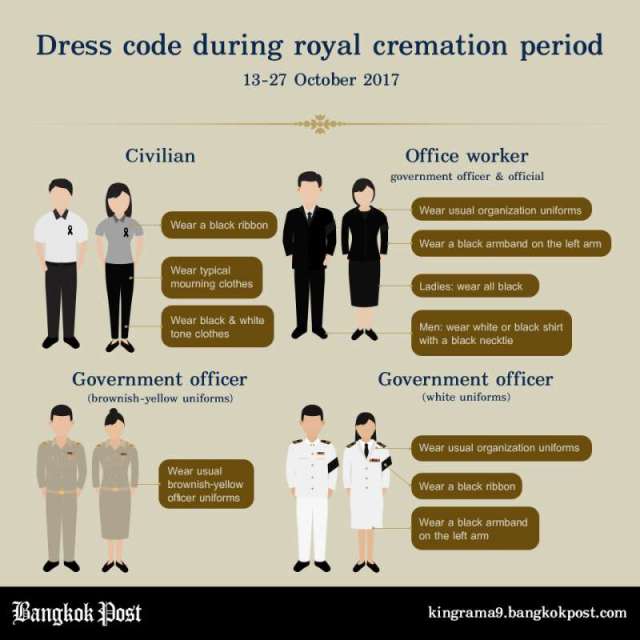 Big C Supercenter owner Berli Jucker Plc said that at all Big C branches will provide free shuttle buses for staff, customers and anyone who wants to join the official ceremony during 9am-3pm. They will also offer free parking for the whole day.

The Mall Group, the operator of The Mall Department Store and The Emporium, and Siam Piwat Co, the operator of Siam Paragon, Siam Center and Siam Discovery, have not yet finalised their store plans for the day of the funeral.

Public transport services nationwide will be ramped up during the ceremonies from Oct 25-29 to better serve the public and help them pay their respects.

Electric trains in Bangkok and nearby metropolitan areas will by and large offer free services from Oct 25-27. Participating lines include the Airport Rail Link, the MRT Purple Line and BTS Skytrain extensions from On Nut to Samrong and Wong Wian Yai to Bang Wa.

The skytrain will also be free for those going to the ceremony, providing a free ride for commuters on Oct 26 from 6am to midnight, starting from Mo Chit station to On Nut station and from National Stadium station to Wong Wian Yai station.

The BRT will allow commuters to travel free of charge during Oct 25-27 from 6am to midnight. Free coupons can be obtained at the ticket offices at all BTS stations. For the Rabbit cardholders values and trip numbers will not be deducted.

On Oct 25 and 27, passengers can travel free of charge only on the BMA extension starting from On Nut to Samrong station and Wong Wian Yai to Bang Wa station.

Service hours for the Airport Link will also be extended until 2am on Oct 26.

The cabinet yesterday approved the Transport Ministry’s proposal to exempt toll fees for commuters on Motorway 9, also known as the Outer Ring Road or Kanchanaphisek Road, and Motorway 7 (stretching from Rama IX Road in Bangkok, passing Motorway Route 9, and Suvarnabhumi airport towards Pattaya) during Oct 24-27.

For those coming from outside Bangkok, free third-class train rides will be available from Oct 23-31 on four routes: Hat Yai, Ubon Ratchathani, Nong Khai and Chiang Mai to Bangkok.

All buses without air conditioning that lead to Wat Phra Kaeo, Sanam Luang and nearby areas will be offered free of charge but passengers will have to pay regular fees for air-conditioned buses.

Major Cineplex Group announced that all 119 Major movie theatres will be temporarily closed on Oct 26 to provide opportunities for all employees to show their loyalty and convey their condolences to the late King. All branches of Major Cineplex will operate as usual on Oct 27.

Marketers should adjust marketing efforts in light of the royal cremation

Out of respect for the late king, the commercial sector has started to tone down their activities during the entire month of October.

TV programming, billboards and advertisements (both online and offline) will be replaced with messaging honoring the late king and footage of the king’s royal duties.

13th and 21st to 29th October (10 Days) – No ad activity or any promoting of events, except for content relating to the mourning period of the Thai King is still allowed to be published.

25th to 27th October  – All ads activity on every platforms or event must be paused (not-active), due to the Royal Thai Cremation ceremony.

28 th – 31 st October – Advertising can resume, however in a subdued manner. No vibrant colors, no comedy and no celebratory content during this period.

Reservations can be made on www.bangkokair.com from Sept 22 to Oct 29 for travel on Oct 10-30.

Nok Air is offering all-inclusive special fares on all of its domestic routes to Bangkok (Don Mueang airport), starting from 750 baht one-way.

Thai Airways International (THAI) and Thai Smile Airways will increase flight frequency to give people across the nation will have the opportunity to participate in the ceremony for His Majesty King Bhumibol Adulyadej.

Acting president Usanee Sangsingkeo said that as the government has declared Oct 26 a public holiday, THAI and Thai Smile will increase flights to enable mourners from across Thailand to bear witness to the ceremony.

The following additional domestic flights will be operated from Oct 23-31 in order to facilitate the increase in passenger traffic.

For THAI, Bangkok-Phuket flight frequencies will be increased to 11 round trip journeys per day, while the Bangkok-Chiang Mai route will boast five round trip flights per day, operating a total of 144 flights covering 90,000 passenger seats.

As the government has announced the Royal Cremation Period for the late King is scheduled for Oct 25-29, tourist attractions across the country will be open as usual except for the Grand Palace and the Temple of the Emerald Buddha, which are closed throughout October.

All transport, hospitals and other public services will be operating as usual except on Oct 26.

But the Tourism Authority of Thailand has advised visitors to reconfirm their plans with travel agents and be aware that in some areas transport may be affected.

TAT has also asked visitors for their understanding and respect for the feelings and sensitivities of Thai people. Locals will be wearing black clothes as a sign of mourning. This is not required of visitors but if possible, they should wear respectful clothing when in public.

The tourism agency has also requested that the solemnity of the Royal Cremation Ceremony be observed, adding visitors should refrain from any inappropriate or disrespectful behaviour.