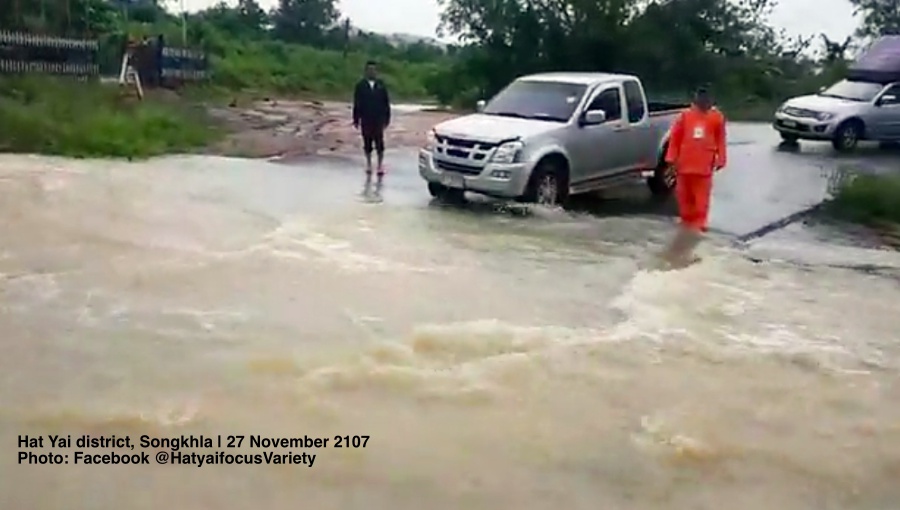 Monsoon rains cause havoc to many southern provinces from Phetchaburi to Narathiwat as the Thai Meteorological Department warned of severe rain and strong winds in the South until Dec 1.

A 60-year-old man was reported to be swept away by floods and went missing in Saba You district of Songkhla yesterday (Nov 26) as he was walking on a flooded village road.

As flood situation in the South deteriorates, the Meteorological Department today forecasts more heavy to very heavy rains to hit 12 southern provinces from today until Friday.

The heavy rains and high waves are expected from the approach of the low pressure system in the South China Sea passing through the Lower South and the Andaman Sea during November 28-December 1.

The low pressure wind will cause heavy to very heavy rains in vast areas in the Lower South. Flash flood, surface flood and flooding in enclosed areas.

It also said 2-3 metres high waves are expected in the Andaman Sea and the Gulf of Thailand. It warned people living near the eastern shores to brace for strong and high waves hitting the shores during the period.

Meanwhile the Disaster Prevention and Mitigation Department director general Mr Chayapol Thitisak said preparation has been made to assist people in 12 southern provinces to be affected by flooding.

In tambon Ko Hong of Hat Yai, the main business district of Songkhla province, local authorities have warned residents to move their belongings to higher ground and be ready for evacuation as Klong Wa canal is rising and may overflow if more rains fall today.

Floods were also reported in some areas of Sating Phra, Thepa, and Na Mom districts of Songkhla, according to Songkhla disaster prevention office.

In Narathiwat, governor Suraporn Prommoon ordered local authorities in 13 districts to stand by 24 hours and ready for assistance as flashfloods and floodings are expected after several days of rains.

In Krabi province, local authorities issued a warning to people living near the coast and rivers in eight districts to be on high alert against possible landslides and flashfloods over the next few days from heavy downpours.

In Trang province, some sections of Trang-Phatthalung road in Na Yong district is still submerged. Authorities expected flooding will expand to affect eight out of 10 districts as rains continue today.

Meanwhile the flood situation in Phetchaburi province is improving with flood water  beginning to recede. However in the municipal area, flood level remains over a metre high in some low-lying communities where boats are still used for travelling.

The Thai Meteorological Department today (Nov 27) warned people in the South to beware of severe rain and possible flash flood during Nov 28 – Dec 1 as the low-pressure system over the lower South china will move slowly through the lower South and the Andaman Sea.

According to the department’s warning issued at 11am, outbreaks of continuous torrential rain are forecast much of the areas in the southern region. Residents should beware of possible flash flood. Affected areas are as following:

“The wind in the Gulf and the Andaman Sea will become strong with waves 2-3 meters high in the Gulf and about 2 meters in the Andaman. All ships should proceed with caution, and small boats in the Gulf keep ashore. Residents should beware of inshore waves,” the department warned.

The post One man missing as floods cause havoc in the South appeared first on Thai PBS English News.