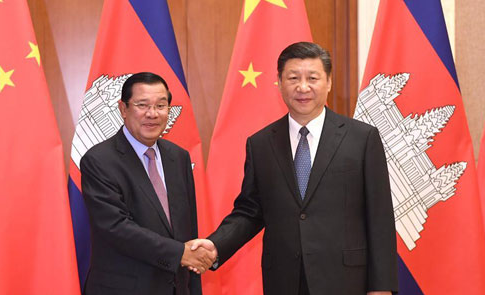 Cambodia has been an enthusiastic supporter of China’s Belt and Road Initiative (BRI) and has made significant in-roads linking its own development to Chinese expansion.

However, with the influx of Chinese capital, Cambodia will find itself drawn further into the sphere of China’s economic and strategic influence.

Amidst the expansion of China’s Belt and Road Initiative (BRI), Cambodia has become an attractive destination for Chinese foreign direct investment.

A period of political stability, low labor costs, easy market access, and Cambodia’s strategic location in Southeast Asia have all been a powerful draw for a massive influx of Chinese money.

Although one of the fastest growing economies in Southeast Asia, Cambodia still struggles to overcome key hurdles to its development, namely infrastructure issues such as electricity, rural road transport, and water sanitation. With few other financial alternatives sizeable enough to cover Cambodia’s infrastructure needs, the promise of a large, no-strings-attached loan makes China’s BRI proposal difficult to resist.

Participation in the BRI, brings with it access to the enormous infrastructure funding of Chinese-led financial institutions, such as the Asian Infrastructure Investment Bank, the Export-Import Bank of China, the China Development Bank, and the Silk Road Fund.

China is the largest foreign investor in Cambodia’s energy sector, with more than $7.5 billion in accumulated capital in hydropower plants. Cambodia and China have agreed on several hydropower dam projects. Kemchay Dam was constructed with Chinese assistance…