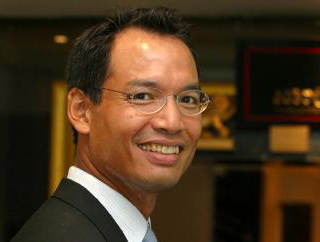 The magazine reported policies that help jump start the economy include the 2,000-baht government cheque package, an allowance for the elderly, and living cost reduction measures, which are part of the Democrat Party’s 99 day action plan and the Thai Khem Keng (Strong Thailand) scheme.

“Against a backdrop of ongoing domestic political upheaval, Thailand has succeed

ed in containing the budget deficit with a projected decline in the deficit for 2010. While GDP growth for 2009 has retracted by around minus 3.5 per cent, it is due to bounce back, reaching a solid 3.7 per cent for 2010,” he quoted The Banker as saying.

Under questioning Dr Buranati conceded the government would experience key risk factors for the second year of its performance, particularly political disturbances that could affect investor confidence and trust.

However, it is believed the government’s measures to relieve farmers’ difficulties, including the crop price guarantee scheme and the farmer income guarantee project, would help boost confidence among farmers that they would not suffer losses, he added.

Finance Minister Korn has become the first Thai minister to receive the awards.