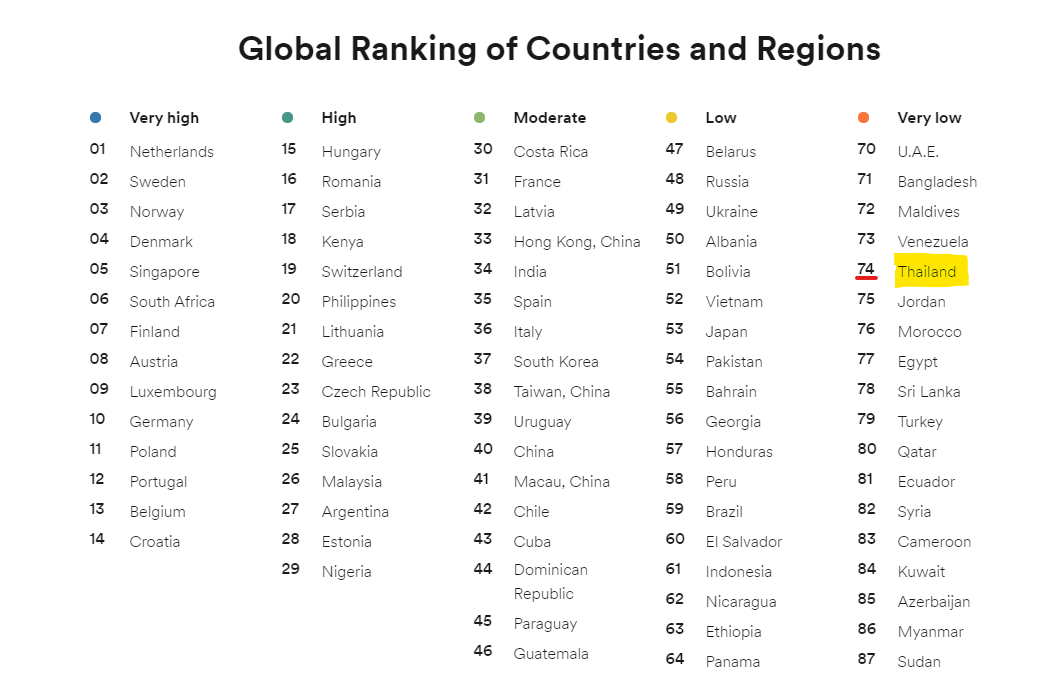 English proficiency is not a strong point for Thais: their level is falling again for the third year in a row, according to the annual English Proficiency Index developed by EF Education First World Education Society.

The English Proficiency Index is based on an analysis of the results of 2.3 million people who have passed the English language tests administered by EF Education.

The report found that English skills are improving around the world. However, in Asia, they have stagnated in the last five years.

The report estimates that countries such as Thailand and Cambodia, whose economies are highly dependent on tourism, could suffer from a lack of fluency in English. With English as the de facto international language, tourists are more likely to choose a competing destination where it is easier to travel with English as the only language.

Thailand has the third lowest score of Southeast Asian countries, behind Indonesia and ahead only of Myanmar and Cambodia, and ranks 17th out of 25 Asian countries.

By region, central and northern Thailand had slightly higher English skills than those in the north-east and south. Bangkok has the highest level of English proficiency in Thailand, followed by Nonthaburi, Chiang Mai, Chonburi and Khon Kaen.

Men in Thailand score slightly higher than women in the report, with grades of 48.68 and 47.59 respectively.

Singapore ranks fifth in the world, and the highest in Asia, behind four rich countries in Northern Europe like the Netherlands or Sweden. The Philippines ranked second in Southeast Asia, followed by Malaysia, Vietnam, Indonesia, Thailand, Myanmar and Cambodia in last place.

But the Philippines, Vietnam, Indonesia, Malaysia and Thailand have all registered a downward trend in their scores, while Cambodia and Myanmar have improved.