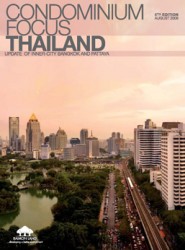 The fourth quarter of 2009 saw the Thai economy post 5.8% GDP growth, due primarily to exports to Asian markets bouncing back, leading to developers releasing more projects and local buyers queuing up to purchase them as confidence has streamed back into the industry.

The latest edition of Condominium Focus Bangkok Update, available as a free download at www.raimonland.com, explains that projects launched by listed developers received an upbeat response with condominium presales totaling THB 15.1 billion in Q4 2009, an increase of 380% over the same quarter in 2008.

Interestingly, domestic buyers represented over 90% of sales during that period while foreigners represented only 8.8% of sales, showing that the political upheaval has upset the international investment market more than Thai buyers.

Raimon Land Deputy Vice President for Research and Development, Simon Dervillé, said the first quarter of 2010 has been active in inner-city Bangkok.

“One of the key findings of our research is that demand from Thai buyers has been remarkably strong with many developers now turning their attention to this target group. At Raimon Land, Thai buyers now represent two-thirds of our sales, gaining significant ground over the foreign demand that was prominent over the past two years,” said Mr Dervillé.

The condominium market appears to be recovering, as all major developers reported stronger Q1/09 presales after a dismal Q4/08. Developers are also enjoying lower construction and material costs alongside a selection of reasonably priced, quality land plots in 2009, but banks remain cautious in releasing new loans for condominium projects.
Condominium development indicators for Q1/09 reveal:

The Thai baht rose to 33.94 baht per USD, a record high in the past two years after the Bank of Thailand (BOT) decided not to take measures to stop the rise of the domestic currency. END_OF_DOCUMENT_TOKEN_TO_BE_REPLACED