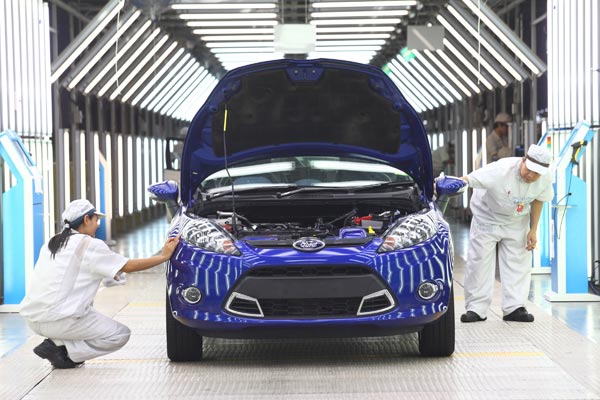 The Thai auto industry has grown from its infancy with just one automotive assembly plant in 1961 to a mature world- class production center currently ranking 13th globally. Nearly all of the world’s major automakers, assemblers, and parts and components manufacturers have established production operations in the country.

The country is well on the way to achieving performance goals set by the Thai government in a master plan formulated in the past decade for the automotive industry’s development. This includes substantial progress toward becoming Asia’s automotive production base, gaining global competitiveness, reaching output targets for passenger cars, pickup trucks and motorcycles, and achieving international recognition as a center for replacement equipment manufacturing or REM parts.

The Thailand Automotive Institute predicts that the country will pass Spain, Canada and Mexico to enter the world Top 10 by achieving the capacity target of 2.3 million units in five years.

Investor confidence in Thailand’s automotive industry is as strong as ever after an unveiling of major projects by leading auto companies in recent weeks. The explosion of new investment in an already robust sector is pushing the country closer to the goa of being a global Top 10 automaker by 2014, when local capacity is projected to hit 2.3 million units.

The furry of investment announcements in late June and early July started with the Ford Motor Company revealing plans to build a 15 billion baht (US$450 million) state-of-the-art passenger car plant in Rayong province. The 750,000sqm factory will start production in 2012, with an initial capacity of 150,000 units.

Joe Hinrichs, group vice president and president of Ford Asia Pacific and Africa, said the new project underscores the company’s long-term commitment to Thailand. “The decision to build our new plant was supported by Thailand’s world-class automotive industry and logistics and export infrastructure,” he remarked.

Toyota Motor Thailand also recently announced that it will invest 4 billion baht to expand its Chachoengsao province plant to 200,000 units per year, as current capacity cannot meet rising demand. One of the plant’s key lines will be the so-called innovative international multipurpose vehicle or IMV.

Becoming the third major automaker to unveil expansion plans within a period of just two weeks, Mitsubishi Motors Corp. revealed intentions to build a 15 billion baht eco-car manufacturing plant in Chonburi province. This represents the company’s largest ever investment in Thailand and its biggest facility outside Japan. The plant eventually will have an annually capacity of 200,000 small fuel-efficient and eco-friendly cars, with production scheduled to begin in 2012.

“Thailand will be our export hub for the Global Small Car,” Osamu Masuko, president of Mitsubishi Motors, said to the local media.

Automotive giant Ford Motor Company, already a major investor in Thailand, now sees the country as an even more crucial part of its future success. In June, Ford announced a 15 billion baht (US$450 million) investment to build a 750,000sqm state-of- the-art passenger car plant in Rayong province. The factory is scheduled to start production in 2012, with an initial capacity of 150,000 units.

The plant represents another big stride under the company’s aggressive expansion in the Asia-Pacific region, which is projected to account for 40% of global auto industry growth in the decade ahead. Besides building the next-generation Ford Focus for Thailand and neighboring markets, the highly flexible factory will be capable of manufacturing a range of other vehicles in the future.

“The Asia-Pacific region is arguably the world’s most dynamic. There is no doubt it will continue to be a driver of the future growth of the company,”

said Alan Mulally, CEO of Michigan- based Ford Motor Company. He made the remarks via video at a 24 June press conference in Bangkok’s Plaza Athenee Hotel to launch the large-scale project in Thailand.

“The auto industry is growing rapidly in Asia, everywhere from China to India to Thailand and markets all around ASEAN. Even during the global economic downturn, the Asia-Pacifc auto market grew, and currently we are seeing a 15% increase from last year. That is one of the major reasons we need this new facility in Thailand for additional capacity.”

This latest investment by Ford also represents a significant contribution to the Thai economy. There is the potential to create 11,000 jobs: employment of 2,200 workers directly with Ford in Thai land and an additional 8,800 through local suppliers and dealers. An estimated 26 billion baht worth of components will be purchased along Thailand’s supply network.

Ford bought 187 acres for the project at Hemaraj Eastern Seaboard Industrial Estate in Rayong, eastern Thailand. “We are thrilled to continue our automotive cluster industrial development with Ford Motor Company for their new plant in Thailand,” said David Nardone, president and CEO of Hemaraj Land And Development Public Company Limited.

Ford has become a major force in the automotive industry in Thailand “The Detroit of Asia”, and Ford intends to boost production further to grow its business and to achieve maximum customer satisfaction. However the beginning was not so smooth.

In 1960 Ford was first established in Thailand. At that time, the Thai Motor Industry Company was formed as a joint venture between Anglo-Thai Motors and Ford U.K. and this company rapidly began assembly operations. Later in 1973 the joint venture was incorporated as a wholly owned subsidiary, Ford Thailand. However, the company decided to cease operations in 1976.

Ford Sales & Service (Thailand) Co., Ltd. was founded in July 1996. It is administered by US Ford Motor which holds 100% of its shares. This company is responsible for all Ford marketing activities in Thailand controlling nationwide sales distribution. This enables Ford to study the demands of Thai consumers so that Thai owners can expect only the best performance from their Ford vehicle. Only highly qualified leaders are appointed to be Ford Sales & Service Dealers in Thailand to achieve the company goal of complete consumer satisfaction.

The Thai baht rose to 33.94 baht per USD, a record high in the past two years after the Bank of Thailand (BOT) decided not to take measures to stop the rise of the domestic currency. END_OF_DOCUMENT_TOKEN_TO_BE_REPLACED