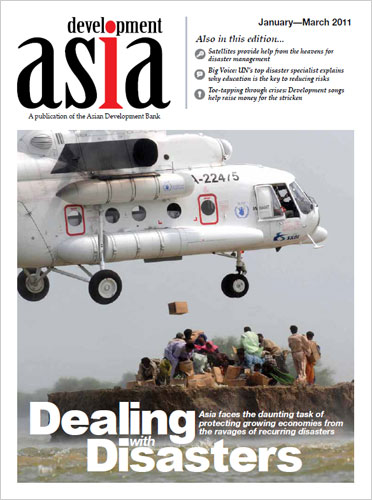 Natural disasters wreak havoc without discrimination, wiping out homes, livelihoods, a country’s economic gains, and often many individual lives. Africa, the Americas, Asia, and Europe have all been struck by catastrophes in recent years.

Natural disasters may strike anywhere; however, they wreak much more havoc on the poor and those living in poor countries with weak governance and economies. Steps to reduce risk have proven successful. Still, effective action must be encouraged.

Asia, however, has been hit hardest: 40% of the world’s disasters have occurred in the region in the past decade, resulting in a disproportionate 80% of disaster deaths. And Asia’s poor, lacking in resources and more vulnerable and exposed to the elements, have borne the brunt of these cataclysms.

Asia faces the task of transitioning to a culture of preparedness and prevention from a disaster response mindset, says ADB new report

Touted as the next economic power, Asia cannot afford to continue along this path. Countries in distress will be hard-pressed to reach their development goals as funds meant for fortifying social and economic infrastructure get diverted for emergency relief and reconstruction.

Efforts to reduce poverty and improve the quality of life in developing countries could suffer sizeable setbacks.With extreme weather conditions attributed to climate change increasing in frequency and complexity worldwide, setting up disaster risk management initiatives at all levels has become even more imperative.

Lessons learned from disaster response and recovery experiences show that a well-coordinated community response is just as vital as emergency action at the national or even international level.This edition of Development Asia looks at the state of disaster preparedness in the region, the economics of risk mitigation and the politics of disaster relief, and proactive strategies and innovative solutions.

We put the spotlight on Bangladesh, long a victim of recurring disasters, where a community-led program has dramatically reduced disaster-related deaths and damage. In The Big Voice, Margareta Wahlström, who heads the United Nation’s Secretariat for the International Strategy for Disaster Reduction, talks about the challenges of preaching preparedness.

On the fundraising side, we examine the sometimes controversial role that celebrities have played in rallying international support for disaster victims.On a lighter note, we also explore how the tiny seahorse is helping to reduce poverty in coastal communities across the region, and chime in about the musical traditions of international development.

Is Thailand Prepared for Crisis and Natural Disasters ?

The Thai baht rose to 33.94 baht per USD, a record high in the past two years after the Bank of Thailand (BOT) decided not to take measures to stop the rise of the domestic currency. END_OF_DOCUMENT_TOKEN_TO_BE_REPLACED

The world’s six largest pension systems will have a joint shortfall of $224 trillion by 2050, imperiling the incomes of future generations and setting the industrialized world up for the biggest pension crisis in history. END_OF_DOCUMENT_TOKEN_TO_BE_REPLACED