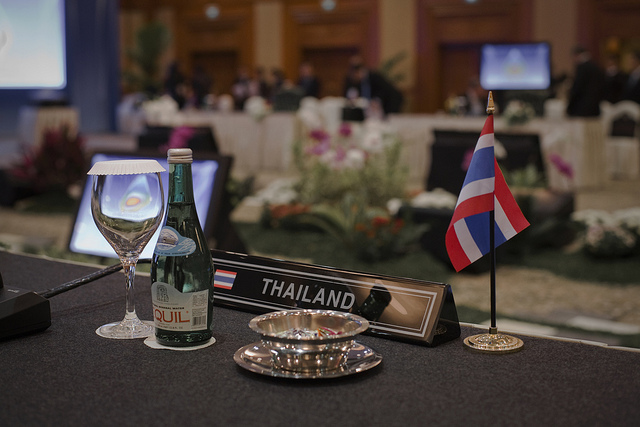 Can Asean finally deliver ?  Because the original Asean was built on a largely informal arrangement, with consensus-driven decision making among Asean governments, it has so far failed to find a peaceful solution to Cambodia-Thailand border conflict. Since February, more than 20 people have died in repeated clashes between the two ASEAN members along their disputed border. Tens of thousands of people have fled their homes on both sides of the border.

Domestic turbulence can spill over borders and limit ASEAN members’ ability to contribute to the regional public good. Photo by Peerapat Wimolrungkarat

The heart of the disagreement is a Hindu Khmer temple known as Preah Vihear in Cambodia and Prah Viharn in Thailand.  The temple sits in Cambodia, but Thailand claims adjacent land that includes a key access route to the complex.  The countries have fought sporadically over the border since 2008.

If Asean functioned as a single economic entity, it would be an “economic country” of 600 million people and boast a GDP of US$1.8 trillion. It would be Asia’s third largest economy and a cultural and trading bridge between China, India, the Middle East and the Pacific. That is, in a peaceful environment of course.

Cambodia-Thailand border conflict should be the occasion for member nations to be even more mindful of Asean’s limitations and setbacks. There are several of these:

Thailand recently acknowledged that the issue could affect the credibility of ASEAN, and asked that any problem should be solved, locally, bilaterally and if needed with the facilitation of the region. But Prime Minister Abhisit Vejjajiva also stated that there is a clear attempt by Cambodia to internationalize the issue.

The changes in the global economic and political, landscape have made regionalisation an imperative, with forces of change in the geopolitical landscape, technological advancement and economic rebalancing. Asean must evolve in order to meet present-day challenges

Thailand has no intention whatsoever to have conflicts. I am therefore disappointed that Prime Minister Hun Sen has stated otherwise regarding Thailand’s intentions. Thailand has de-coupled the border dispute from other issues.

Even today, we continue to provide development cooperation assistance to Cambodia because we believe that Cambodia’s prosperity is linked with our prosperity. Even in times of dispute, we have continued to provide assistance, trade and cooperate economically.

Domestic turbulence can spill over borders and limit ASEAN members’ ability to contribute to the regional public good. As a regional group, ASEAN cannot shape the domestic politics of its members, but a collective commitment to participatory democracy and regionalism helps.

The Indonesian foreign minister says talks Friday included the question of Burma’s request to take over the chairmanship of ASEAN in 2014. But several organisations objects to the idea of Burma (also called Myanmar) leading the association, given it says, the country’s long record of human rights abuses and its lack of democratic development.

As in any organization, a growing degree of harmonization among member nations is necessary. With Asean’s very heterogeneous membership, the challenge to evolve as a collective entity is that much greater.

Related Topics:free-tradehuman rights
Up Next