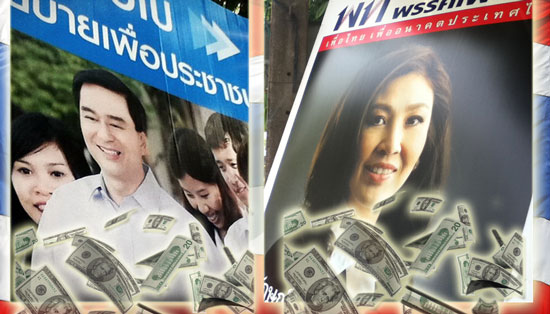 As the showdown of general elections is approaching, main contenders are engaged in a perilous bidding war. Raising the minimum wage is attractive because it will put more money in workers’ pockets, increasing both their happiness and their purchasing power. But the income guarantee has been countered by even a sexier offer of issuing credit cards to farmers by Pheu Thai. It’s a battle of announcement and figures, that favors short term thinking and has little to do with Thailand’s interest in the long term.

While industrialization over the past four decades has reduced the contribution of agriculture to gross domestic product, more than one-third of the labor force continues to work on farms. Winning these 24 million votes could be a decisive factor in the election.

A three-year debt moratorium would also be offered to farmers with debts under 500,000 baht. For those with debt of up to 1 million baht, refinancing would apply. The plan mirrors a previous scheme by the Thai Rak Thai Party during the Thaksin Shinawatra government.

Thailand populist pre election offering is short term thinking and has little to do with Thailand's interest in the long term.

Pheu Thai Party economists say they will move quickly to bring back crop mortgage programmes to support local farmers if they win the July 3 election, coupled with a credit card program with safeguards against abuse.

The costs of the programmes can be managed to minimize any impact on the country’s fiscal standing, they say.

The rice pledging programme would offer payments of 15,000 baht per tonne for white rice paddy and 20,000 baht for Hom Mali fragrant rice, about 50% higher than current market prices

Raising the minimum wage is attractive because it will put more money in workers’ pockets, increasing both their happiness and their purchasing power. This, in turn, can lead to stimulation of the national economy.Nevertheless, one negative impact which is difficult to avoid with wage rises is a hike in production costs.

Businesses then have to raise their prices to remain in operation. When prices climb, policymakers tend to increase the interest rate in a bid to reach price stability.It is debatable as to which factor – a minimum-wage increase or an interest rate hike – has the greater impact on the economy. To get an accurate answer, it is necessary to ask policymakers what result they desire from their actions.As a matter of fact, the local economy still confronts such external risk factors as the debt crisis in European countries, weak economy in the US, and the after-effects of the earthquake in Japan.

Meanwhile, the actions of policymakers suggest that they are looking to solve medium- to long-term problems rather than those of the short-term. The thing that should be realized is that capital inflow is still high in the Asian region. Therefore, worries over the domestic economy should not be exaggerated.

via What changes to policy rate, minimum wage could mean for economic growth.

The populist programmes proposed by parties campaigning for the July 3 election will reduce the economy’s competitiveness in the long run, warns Prasarn Trairatvorakul, the Bank of Thailand governor.

Increasing fixed expenditures on education, healthcare and civil service pay have eclipsed the investment budget in recent years. And more short-term spending programmes could worsen the trend, he said in a speech to the Thailand Management Association on Wednesday.

Dr Prasarn said the budget for public investment was just 18% of total government spending last year, well below the 25% target.

“Welfare spending has increased in line with people’s entitlement stipulated in the 2007 Constitution. Political unrest has prompted the government to solve economic disparities, and there has been increasing discussion of the welfare state,” he said.

“Although such policies can ease the disparity, they may harm productivity in the long term. This is because public investment has been at a low level, affecting infrastructure investment.”

– Additional one million baht fund to be allocated to each village on top of existing one-million-baht village fund.

– Maintain farm income guarantee programme for rice, maize and tapioca with a plan to increase farmers’ earnings by 25%.