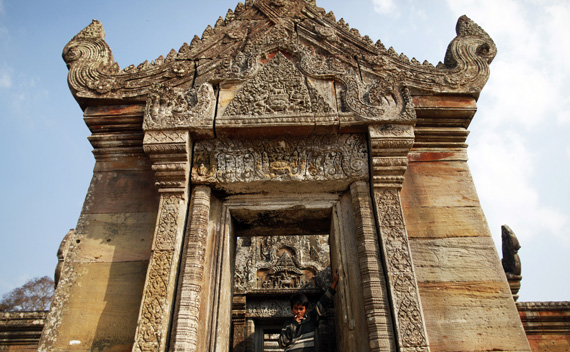 Thailand announced its departure from the World Heritage Convention with‬ ‪immediate effect on Saturday, after the World Heritage Committee failed to heed its request seeking postponement of the Cambodia’s unilaterally-proposed Preah‬ Vihear Temple management plan, as Thailand fears that it may threaten national sovereignty.

Thailand’s Natural Resources and Environment Minister Suwit Khunkitti, leading the Thai‬ delegation at the 35th session of the WHC meeting in Paris, earlier notified Mr Mounir‬ Bouchenaki, director-general of International Centre for the Study of the Preservation and‬ ‪Restoration of Cultural Property, who represents the director-general of United Nations‬ ‪Educational Scientific and Cultural Organisation UNESCO, that Thailand would leave the World‬ Heritage Convention and would also withdraw from the 21-member World Heritage Committee as the‬ body continues to ignore any negative consequences which may arise from the consideration of the temple management plan which he said overlooks sensitive issues which could adversely affect Thailand’s sovereignty and territory.‬

However, the withdrawal was not fully backed by the Foreign Ministry, a government source said.

Officials from the Foreign Ministry who attended the meeting together with Suwit in Paris were satisfied with their negotiations with the Cambodian delegation on the draft of the World Heritage Committee’s decision.

The Thai business opportunities in Cambodia in the long-term inevitably will be harmed if the border conflict persists.

Suwit, who led the Thai delegation to the World Heritage Committee meeting in Paris last week, reported to the Cabinet on his decision to walk out of the session and the announcement of denunciation. The action is to protect Thai sovereignty over the territory adjacent to the Preah Vihear Temple, Panitan quoted Suwit as telling the Cabinet.

Abhisit backed Suwit’s decision and most of ministers in the Cabinet agreed with him, but the caretaker government decided not to carry out the procedure of denunciation, Panitan said.

‪Mr Suwit also said the World Heritage Centre, instead of revising the wording of the draft, decided to put it on the agenda of the WHC meeting in Paris, despite Thailands request to have the plan deferred, pending border demarcation with Cambodia. ‬‪Thailand is opposed to the terms of “urgent repair and restoration” but preferred using the wording “protection and conservation” in the draft.‬ ‪The head of the Thai delegation also said the pullout means that any WHC resolution will not be binding to Thailand.‬‪

The withdrawal has resulted in the Director General of the Fine Arts Department, Mrs Somsuda Leyavanija, one of 21 members of the WHC, to leave her post.‬‪ Mr Suwit earlier posted a message on his Twitter account late Saturday night saying, “Thailand has no choice but to withdraw as the meeting has resolved to put the issue on agenda.”‬

via Thailand pulls out of World Heritage Convention ‬.

Director-General Irina Bokova has sent a letter expressing her regret over Thailand's decision to withdraw from the World Heritage Convention.

Mr Abhisit, before the weekly cabinet meeting, showed reporters a letter from the UNESCO chief and said briefly that he would address a news conference on Thailand’s stance after today’s Cabinet meeting.

National Resources and Environment Minister Suwit Khunkitti, as head of the Thai delegation to the World Heritage Committee meeting in Paris, will report the issue to the Cabinet and agencies concerned will study the implication of the UNESCO agency’s resolution on Cambodia’s management plan for Preah Vihear after Thailand leaves the convention.

In her letter dated June 26, Ms Bokova has expressed deep regret with Mr Suwit’s declaration on the Thai intention to leave the 1972 World Heritage Convention.

“The World Heritage Committee did not discuss the management plan of the Preah Vihear temple nor did it request for any reports to be submitted on its state of conservation. Moreover, it needs to be clarified that UNESCO’s World Heritage Centre never pushed for a discussion of the Management Plan by the Committee,” Ms Bokova said in the letter.

Speaking after a cabinet meeting yesterday, Mr Suwit denied he would benefit from the decision to withdraw from the convention.

He said the decision was not premature and was intended to protect the country’s dignity and territorial integrity.

During the past three years he had done everything he could to lobby and convince member nations that the management plan was a sensitive issue and that approving the plan could lead to problems.

He said a resolution relating to Preah Vihear adopted at the Paris meeting of the World Heritage Committee had allowed Cambodia to carry out maintenance and repair work for Preah Vihear and the areas surrounding it and to seek financial assistance from Unesco.

Mr Suwit said he found the resolution unacceptable because it could lead to the loss of Thai territory.

If Thailand had accepted the resolution, it would have given Cambodia a chance to use it to fight at the International Court of Justice for ownership of the disputed areas around the temple.

Thailand’s populist addiction is back

The Thai baht rose to 33.94 baht per USD, a record high in the past two years after the Bank of Thailand (BOT) decided not to take measures to stop the rise of the domestic currency. END_OF_DOCUMENT_TOKEN_TO_BE_REPLACED

The world’s six largest pension systems will have a joint shortfall of $224 trillion by 2050, imperiling the incomes of future generations and setting the industrialized world up for the biggest pension crisis in history. END_OF_DOCUMENT_TOKEN_TO_BE_REPLACED