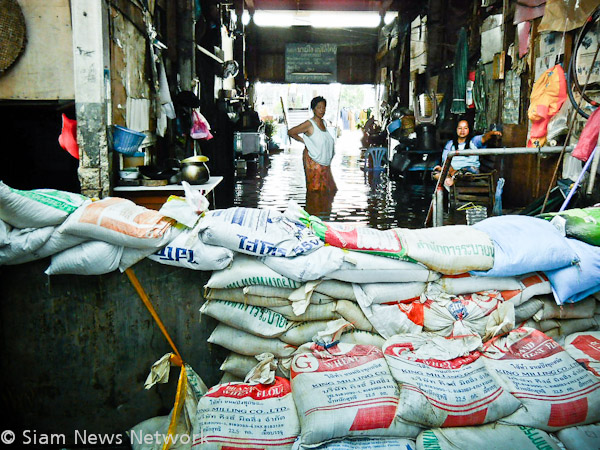 The Thai Government plans to launch a major recovery program after flood water recedes. As for the post-flood recovery plan, Energy Minister Pichai Naripthaphan said that the project “New Thailand” was raised for discussion by Prime Minister Yingluck Shinawatra at a special Cabinet meeting on 30 October 2011.

The project is meant to rebuild the country in accordance with a broad perspective, once the flooding has withdrawn. Information from various agencies and proposals from foreign countries would be brought up for discussion, as well. As for the rehabilitation of industrial estates, Mr. Pichai said that a budget of about 100 billion baht was expected in the short term.

No extension of the extra government holiday in 21 provinces.

Another 600-800 billion baht would be required in the long run. He said that the Ministry of Energy would launch a project to allow vocational students to help check and repair damaged machines, equipment, and even vehicles. The Ministry would also consider reducing the electricity rate in flood-stricken areas. At the same time, Mr. Pichai said that a great number of workers would be hired to rebuild various facilities, so this would also help stimulate the country’s economy. He said that Thailand had a large amount of reserve funds for use in post-flood rehabilitation, while several countries had also offered to provide financial support.

The project New Thailand is meant to rebuild the country in accordance with a broad perspective, once the flooding has withdrawn

Following the special Cabinet meeting on October 30, Prime Minister Yingluck said that no extension for the extra government holiday would be announced. The Government earlier declared the period between October 27 and 31 an extra government holiday in 21 flood-hit provinces, including Bangkok.Despite no extension of the extra holiday, she called for cooperation from both the public and private sectors to allow their flood-affected staff time off, so that they would have a chance to look after their families during the flooding. Prime Minister Yingluck said that she held a meeting with the Water Management Committee every day to assess the situation.

The meeting heard a report that progress had been made on controlling the floods. For instance, the situation at Khlong 9 in Pathum Thani province is improving. However, the Government has alerted Bangkok residents living near canals in Bangkok to be braced for flooding. The Prime Minister urged local people in certain flood-hit areas not to destroy water barriers, as this would make flood control much more difficult.

via Inside Thailand — A Major Post-Flood Recovery Program to Be Launched.