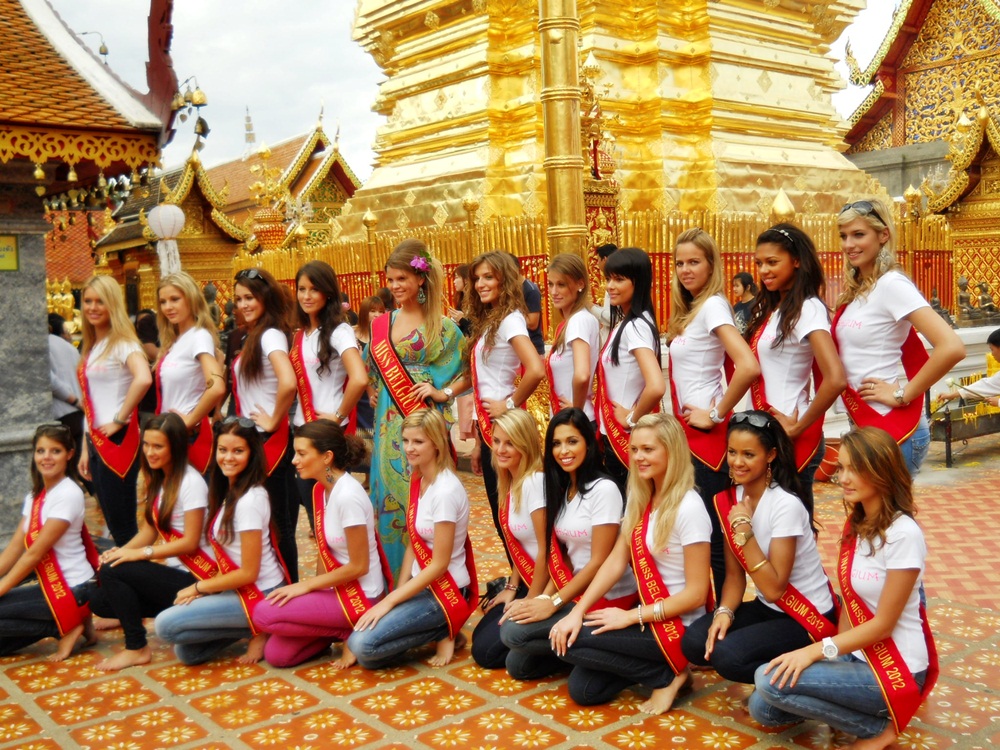 The Tourism Authority of Thailand (TAT) has an urgent message to deliver and wants to communicate that the city of Chiang Mai (second in Thailand after Bangkok) is not affected by the flood. Several journalists of the local and international media have been invited in Chiang Mai, to report that the situation is normal in the northern main city of  Thailand, and the Sunday night market is busy as usual. Although some events have been postponed, like the Royal Flora Ratchaphruek flower expo, other touristic attractions remain opened.

Known as the ‘Rose of the North’ for its charm and beauty, Thailand’s northern city of Chiang Mai is stepping up efforts to ensure its normal flow of visitors in spite of the tragic flooding affecting some parts of Bangkok, the national capital and main gateway.

Although postponed, because of the flooding, the Royal Flora Ratchaphruek flower expo will eventually open from Decembre 14th 2011 to January 14th 2012

Hotels, tour operators and numerous other businesses, especially at the grassroots level, have been affected by the business downturn caused by the perception that large parts of Thailand are flooded. The people and tourism industry of Chiang Mai feel that as they were entirely unaffected by the floods, they should work and cooperate to keep the visitors flowing as best as possible.

According to Mr Vorapong Muachaotai, President of the Chiang Mai Tourism Business Association, as quoted in the Bangkok Post:

“A lot of international tourists, especially Asians, have cancelled or postponed trips to Chiang Mai because of the floods.”

To help redress the situation, Chiang Mai exhibitors were busy working at the World Travel Market in November 7-10. More efforts will be made at numerous other upcoming trade shows, such as the ASEAN Tourism Forum in Manado, Indonesia, in January 2012 and the world’s leading travel trade show, ITB Berlin, March 7-11, 2012.

The Eurozone crisis has also affected European visitors to Chiang Mai. The share of tourism revenue from Europe has fallen from 49% in the past to 30%, while Asia’s share has risen from 29% to 49%, Mr Vorapong says.

Chiang Mai is the economic, communications, cultural and tourism center of Northern Thailand. In recent years, it has undergone considerable economic development but still retains its historic heritage.

It is also becoming increasingly well-known as a centre of traditional Thai massage, meditation, spas, health and wellness. The accommodation sector is vastly improved, with new properties ranging from specialist boutique hotels to health and wellness retreats to deluxe resorts.

This year, some major events and activities will be organised in Chiang Mai such as the Royal Flora Ratchaphruek International Horticultural Exposition that will run again from December 14, 2011 until March 14, 2012.

Thai Airways International is heavily promoting the Royal Flora Ratchaphruek by offering Royal Orchid Holidays at special rates starting from THB 6,135 per person, including a round-trip economy class air ticket (inclusive of airport tax and applicable fees), two night’s accommodation with breakfast, round-trip airport transfer to and from the hotel, admission ticket to the exposition, Giant Flora Wheel ticket, admission ticket to the Chiang Mai Zoo and entrance fee to see the Panda (limited number of tickets are available).

A lot of confirmed businesses are also flowing normally

For example, an incentive group of 6,000 Executives and Members of Amway with their families from South Korea will be in Chiang Mai during November 15 – December 13, 2011. Seven groups of 700-850 people each will fly to Chiang Mai aboard Korean Air chartered flights (3 flights a day) and stay for five days at the Shangri-La Chiang Mai Hotel. TAT is expecting over 100 million Baht in income and expenditure that will be generated from this group.

In addition, the pageant organiser of the Miss Belgium 2012 beauty contest selected Chiang Mai and Lampang as the backdrop destination for the various fashion and other film-shoots accompanying the main event during November 17 – 26, 2011.

Another event that will be held on November 22-23 is the Chiang Mai and the North Tourism Forum (CTF) 2011. This event will promote the tourism products of this northern city including ‘Chiang Mai: The Most Splendid City of Culture’ and the ‘World’s Best City’, ‘Chiang Mai MICE City’, and ‘King of Mountains to the Queen of Andaman’.

According to the Airports of Thailand, during January – October 2011, international passengers disembarking at Chiang Mai International Airport totaled 133,693, up 44.1% over the same period of 2010. However, the October – November figures are expected to be much lower.

The city is also facing a hotel oversupply since late 2007, when the last Royal Flora Ratchaphruek Expo was held. There are currently 40,100 units in hotels, resorts and serviced apartments in Chiang Mai, with new supply expected to increase each year.

According to Mr Vorapong, new projects coming up include Promenade Chiang Mai, the Chiang Mai International Convention and Exhibition Centre and the renovated Chiang Mai Night Safari. The opening of the R3A Road connecting Thailand, Myanmar, Lao PDR. and China should help woo more Chinese tourists to Chiang Mai and Chiang Rai. All of these will have a positive impact on visitor arrivals.

The original visitor arrival targets for Chiang Mai was around 2.3 million (1.3 million foreign, 1 million domestic) with generated revenue of 38 billion Baht in 2011.

TAT intensifies PR campaign to lure back tourists after floods

The Thai baht rose to 33.94 baht per USD, a record high in the past two years after the Bank of Thailand (BOT) decided not to take measures to stop the rise of the domestic currency. END_OF_DOCUMENT_TOKEN_TO_BE_REPLACED