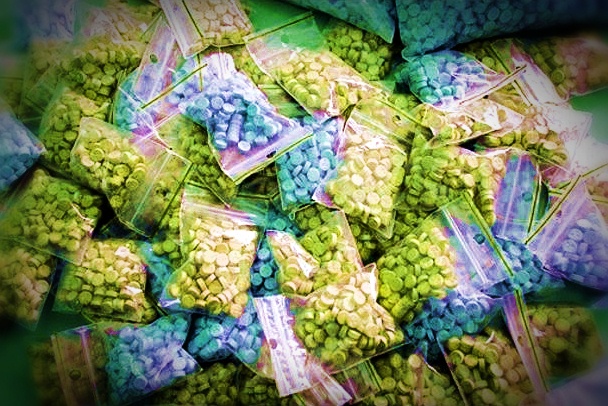 The seizure took place late Thursday night by a combined unit of Mae Chan police and paramilitary rangers from the Pha Muang Force. The authorities acted after being tipped off that drug traffickers planned to smuggle a huge shipment from a Myanmar into the kingdom along the border in Chiang Rai’s Mae Fa Luang and Mae Chan districts, according to Pol Maj Gen Surachet Topunyanon, commander of Chiang Rai provincial police.

United Nations report on international drug trafficking is warning of increasing demand and supply of amphetamine type stimulants (ATS) across Asia, with Burma remaining the main source of production

Responding to the tip, the authorities set up checkpoints along the border and at the targeted locations. During the inspection, drivers of a pickup truck and two motorcycles tried to veer off from the Jakona village checkpoint in Pa Tung subdistrict by driving away.

The authorities tracked them to a village and found the pickup parked with suspicious rucksacks. Investigators found 34 rucksacks containing 4,080,000 meth pills in the pickup cab and that the vehicle belonged to Chidpol Buangern, a Lampang resident.

A United Nations report on international drug trafficking is warning of increasing demand and supply of amphetamine type stimulants (ATS) across Asia, with Burma remaining the main source of production. But officials are also warning of the emergence of Iranian and West African drug trafficking gangs infiltrating Asia.

Thai and Myanmarese narcotics control agencies, plus a related foundation, are joining together to develop their peoples’ quality of life by fighting against drugs at the root cause of the problem by replacing crops in opium farming areas.

The Myanmar drug programme chief visited the foundation’s Doi Tung Development Project to consider using it as a model for an alternative sustainable project in Shan State along the Thai-Myanmar border, where many opium plantations occur, resulting in significant heroine production and drug channelling through northern Thailand.

Thai ONCB head Pol Gen Adul said the first six months of the process will create understanding among ethnic minorities in Myanmar and to foster a positive attitude about sustainable living with the forest in their land.

Thai officials in both agencies will assist in lifting the quality of life for local residents, building a local heath station, and promoting good livelihoods without relying on drugs.

Guidelines for planting replacement crops in opium growing areas will be provided by the Doi Tung Development Project.

Representatives from ONCB and the Mae Fah Luang Foundation will be discussing with representatives from Myanmar again tomorrow at Shan State’s Tha Chi Lek to agree to terms and agreements on which areas in Myanmar to be applied with the project.

The Thai government supports an annual budget of Bt15 million to develop plantations  in Myanmar as a way to address the drug problem at its root cause.

According to a related report, there are around 36,000 rai of farm land, or 14,400 acres, dedicated to opium plantation in Myanmar near the Thai border. Such an expanse of land can produce around 14 tonnes of heroine, which 20 per cent higher than that of last year’s production.

Thailand Calls on ASEAN to Work in Unison against Narcotic Drugs

Thailand has urged ASEAN Member States to work in unison against drugs in the pursuit of a Drug-Free ASEAN in 2015.

Professor Tongthong emphasized that the narcotic drug menace is a regional issue which needs cooperation and partnership from all stakeholders in ASEAN. This is in accordance with the ASEAN Political-Security Community Blueprint, which states that ASEAN Member States will work towards a drug-free ASEAN by 2015.

In this regard, he proposed that the ASEAN ministers responsible for information work together to educate and communicate to the people in this region the dangers of narcotic drugs.

Thailand is committed to standing shoulder to shoulder with the other ASEAN member countries to tackle the drug problem and to achieve the common goal of a drug-free ASEAN. ASEAN countries have a long history of fighting drugs, since the adoption of the ASEAN Principles to Combat the Abuse of Narcotic Drugs in 1976. They signed a Joint Declaration for a Drug-Free ASEAN during the 31st ASEAN Ministerial Meeting in the Philippines in 1998. The declaration envisions a Southeast Asia free of illicit drugs, free of their production, processing, trafficking, and use, well before 2020. Later, the 33rd ASEAN Ministerial Meeting in Bangkok in the year 2000 agreed to bring forward the creation of a drug-free ASEAN from 2020 to 2015.

According to Thai military officials, the foremost threat to Thailand’s national security — greater than any since the communist insurgency of the 1970s and early 1980s — lies along the northern border. It consists of a mass of highly addictive methamphetamine pills, (known locally as ya ba, which translates to “crazy medicine”) produced in Myanmar for the Thai market by the United Wa State Army (UWSA), minority insurgents at present in a cease-fire agreement with Yangon.

In January 2000, both then Royal Thai Army (RTA) commander General Surayud Chulanont and Thai Armed Forces Supreme Commander General Mongkol Ampornpisit inspected troops along the northern border. They were followed in early February by General Boonlert Kaewprasit, head of the RTA’s Narcotics Suppression Committee, who, after a three day tour of the (northern) Third Army Region stated that: “The situation is now quite critical and decisive action inevitable.”

From an early user-base among sugar cane workers and long distance truck-drivers, Myanmar- produced methamphetamine has spread to infiltrate homes, schools, offices and factories throughout the country. The pandemic of ‘ya ba’ has left in its wake a widening swathe of organized crime, official corruption, street violence and broken families. The impact among youths and students has been most severe. A September 1999 survey of 32 of Thailand’s 76 provinces, including Bangkok, found that 12.4 per cent of youth in secondary and tertiary education were either using or dealing drugs and nearly 55 per cent of that group were using methamphetamines.

A variety of insurgent groups inside Myanmar are involved in various drug production and trafficking activities. However, it is believed that all of the methamphetamine tablets smuggled into Thailand last year were produced in areas controlled by the UWSA. RTA. Some reports have stated that up to a billion tablets were smuggled into Thailand in 2003 from UWSA labs in Myanmar.

Thailand’s New social security system should include all hospitals

Thailand Cashes in on its “World-Class Health Provider” status

The Thai baht rose to 33.94 baht per USD, a record high in the past two years after the Bank of Thailand (BOT) decided not to take measures to stop the rise of the domestic currency. END_OF_DOCUMENT_TOKEN_TO_BE_REPLACED

The world’s six largest pension systems will have a joint shortfall of $224 trillion by 2050, imperiling the incomes of future generations and setting the industrialized world up for the biggest pension crisis in history. END_OF_DOCUMENT_TOKEN_TO_BE_REPLACED