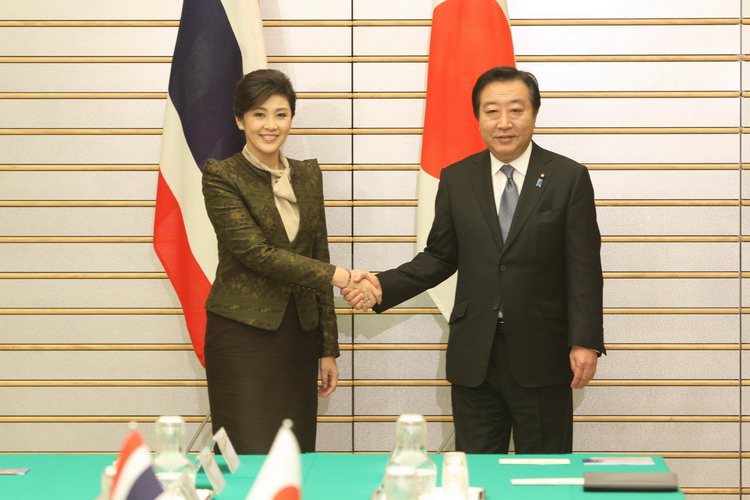 The Thai and Japanese prime ministers have stressed the importance of the economic partnership between the two nations as both countries agreed to target boosting the value of their trade to hit US$100 billion by 2017.

Ms Yingluck told the media that she thanked all sectors of the Japanese government and people for their kindly assistance to Thailand during last year’s flood crisis. She also assured the Japanese business community that the Thai government would do its best with every effort so that she is confident that the government’s measures guarantee that severe floods will not happen again like last year.

The government has fixed a plan for sustainable water management, with both urgent and longer term actions. The plan is already initiated and is progressing. The current urgent measures are expected to be completed this month.

Visiting Thai premier Yingluck Shinawatra on Wednesday and her Japanese counterpart Yoshihiko Noda jointly attended the full plenary of the bilateral meeting of Thai and Japanese delegates. The two leaders then held a joint news conference.

The urgent phase includes rehabilitation and improvement of existing infrastructure for water management, formation of an integrated water management agency, a database and warning system development, and designation of reservoirs or water retention areas, as well as compensation for those affected by earlier floods.

As for the longer term measures, Thailand has put in place plans to manage river basins, among others. The Thai parliament approved a draft bill for Bt350 billion for loans to implement the plans.

She said the government will assist in certain costs, specifically two thirds of the total investment for the dykes to be constructed to protect industrial estates affected. Apart from this, the government has set up a Bt50 billion fund for natural disaster insurance to help the people and entrepreneurs affected.

Ms Yingluck said Thailand and Japan have enjoyed a close relationship long standing for over one century. This relationship is one of compassion, warmth and mutual benefit between the peoples of the two nations. This is seen in the fact that the people of both countries have offered both assistance and moral support to each other in times of natural disasters in the past year.

Due to Thailand’s flood crisis last year, Ms Yingluck said her government allocated a budget of Bt350 billion to implement an effective water management plan to protect industrial estates where many Japanese plants are located, while integrated centres to deal with flood problems immediately are to be set up and ready by the end of this month. She said she was confident that foreign investments in Thailand can be protected, as a result.

Thailand has a policy to support production and a dynamic economy, while having measures on corporate income tax reduction, infrastructure and transport development such as high-speed train construction and deep sea ports to link with other countries in the region.

Ms Yingluck said Thailand will be a distribution centre for moving Japanese goods to other member states of the Association of South East Asian Nations (ASEAN).

She noted Thailand will continue as the best choice for Japan’s continuing private investment, thanks to her administration’s policy, the strong Thai economy, skilled workers, an outstanding industrial sector and secure capital reserves.

The Thai prime minister is meeting with other Japanese representatives and investors to boost their confidence on how Thailand is rehabilitating its economy after last year’s flood crisis, to clarify sustainable solutions to flood problems, to provide assistance guidelines to Japan’s industrial sector in Thailand, and to offer guidelines to Japanese investors on investment expansion in the country.

The Thai baht rose to 33.94 baht per USD, a record high in the past two years after the Bank of Thailand (BOT) decided not to take measures to stop the rise of the domestic currency. END_OF_DOCUMENT_TOKEN_TO_BE_REPLACED

The world’s six largest pension systems will have a joint shortfall of $224 trillion by 2050, imperiling the incomes of future generations and setting the industrialized world up for the biggest pension crisis in history. END_OF_DOCUMENT_TOKEN_TO_BE_REPLACED