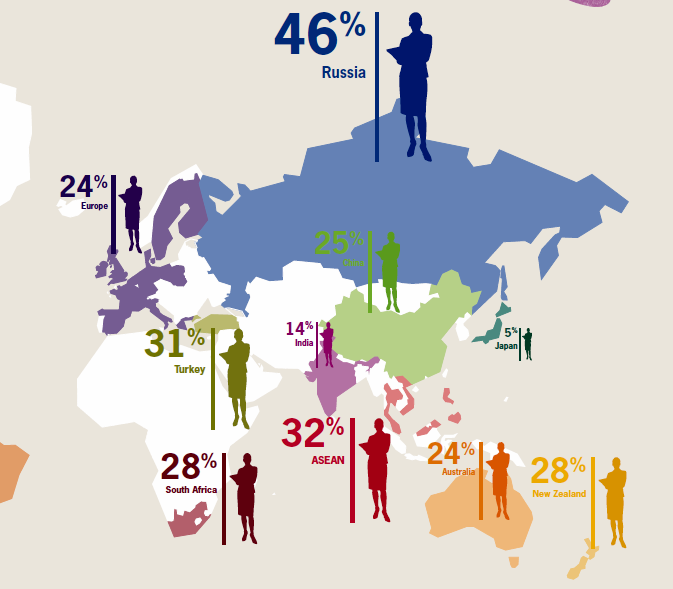 The proportion of women holding senior management roles in Europe is steadily increasing according to the latest research from Grant Thornton. However, the reverse is true in emerging markets, where businesses have historically employed more females in senior roles. This leaves the global average at 21%, barely higher than the 2004 level.

Nearly four out of 10 senior executives in Thailand are women, a participation rate that ranks second highest in the world, according to a study by consultancy Grant Thornton.

The company’s International Business Report showed that 39% of senior managers in Thailand are women, a level tied with the Philippines and Botswana and just behind the 46% rate recorded for Russia.

Last year, Thailand led the global rankings with 45% of senior management roles held by women. The global average for this year was 21%, a level barely higher than in 2004.

women in senior management in Europe has continued to rise steadily

Despite rising unemployment, the proportion of women in senior management in Europe has continued to rise steadily from 17% in 2004 to 20% in 2009 to 24% in 2012, catching up with peers in emerging markets.

April Mackenzie, global head – governance and public policy at Grant Thornton International, said: “Across Europe, getting more women into senior management positions has been high on the political agenda for quite some time. Governments have been vocal about addressing the imbalance and as a result businesses have been under real scrutiny. This encouraging rise in senior women shows the effect this attention is starting to have.

“The steady drop-off we are seeing in the emerging markets is a real concern though. The worry is that we may be reaching the point where women are underrepresented in senior management the world over.”

There are a myriad of cultural, economic and social barriers which prevent women from reaching the top jobs, but rapid urbanisation, which has accompanied rapid economic growth in emerging markets, could help explain why the proportion of women in senior management is falling away.

Since 1978, China has experienced the largest internal migration in human history, with nearly 160m people moving from the countryside into cities.

April Mackenzie explained: “The movement into cities has begun to break down traditional models of extended families. The in-built childcare infrastructure which allowed children to be raised by grandparents, enabled women to work full-time. This is being replaced by ‘Western-style’ nuclear families which rely on one parent looking after the children or the prospect of expensive childcare.

“Urbanisation presents more opportunities for more people, including women, in many different ways. But the challenges it places on the family model appear to be having a disproportionately large effect on the ability of women to break the glass ceiling and occupy senior management roles.

The biggest risers over the past 12 months include Turkey

“Governments and business leaders in emerging markets need to start working now to address this decline. The last thing we want to see is a race to mediocrity where the proportion of women in senior roles in these countries bottoms out and stagnates for a number of years. Or indeed that these high growth economies lose talent because women in the burgeoning rising middle classes opt out of the workforce altogether.

“There needs to be a public discussion now about the policies and practices that will enable and encourage women to continue to progress in the workplace.”

The IBR suggests that offering flexible working could help reverse this trend in emerging markets. Nearly two thirds of businesses in the EU (65%), where the proportion of women in senior management roles is increasing, currently offer flexible working. This is well ahead of Latin America (49%), the BRIC economies (36%) and Asia Pacific (32%).

April Mackenzie said: “Businesses in the emerging economies are lagging behind on the flexible working front. Greater adoption of this might allow a greater proportion of women to make senior positions in the future, reversing the current decline.”

Of the 40 economies surveyed, businesses in Russia employ the most women in senior management (46%), ahead of Botswana, Thailand and the Philippines (all 39%), whilst Italy ranks highest in Europe (36%).
Bottom of the table is Japan, where only 5% of senior management positions are filled by women, below Germany (13%), India (14%) and Denmark (15%).

(25% to 31%), and the United Arab Emirates (8% to 15%), results that suggest that the wave of economic liberalisation in the Middle East as a result of the Arab Spring could have boosted the chances of women in the region reaching the top.

Delivering a policy statement to education administrators, educators and support workers nationwide via live broadcast on his first day of work, the minister said he would expedite expanding educational opportunities for students to have equal access to education-related resources and funding sources.  He pledged to promote skills training, lifelong learning and efficient learning by utilising technologies.

The OCD Chef Cutting Board

The Thai baht rose to 33.94 baht per USD, a record high in the past two years after the Bank of Thailand (BOT) decided not to take measures to stop the rise of the domestic currency. END_OF_DOCUMENT_TOKEN_TO_BE_REPLACED