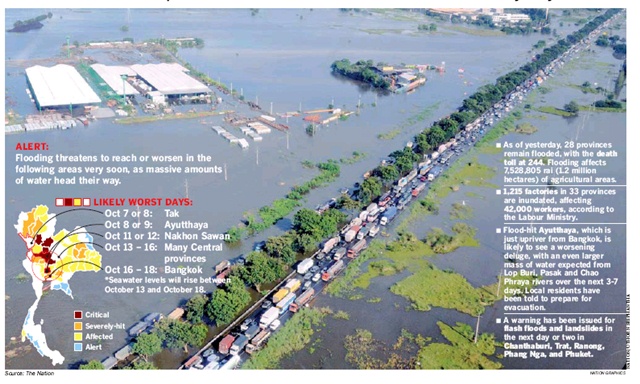 Despite immense insured losses of USD 116 billion (a 142% increase over the previous year) arising from record earthquake and flood losses, the insurance industry weathered the year well and played a key role in risk management and post-disaster recovery financing.

Highest ever recorded economic losses In 2011, total economic losses to society due to disasters (both insured and uninsured) reached an estimated USD 370 billion, compared to USD 226 billion in 2010. The earthquake in Japan, the largest known in terms of magnitude to have ever hit the country, accounted for 57% of 2011’s economic losses.

Altogether, natural catastrophe insured losses came to around USD 110 billion, while losses from man-made disasters were around USD 6 billion, making 2011 the second-highest catastrophe loss year ever for the insurance industry.

“Last year saw extraordinary and devastating catastrophic events. The earthquakes in Japan, New Zealand, and Turkey, as well as the floods in Australia and Thailand, were unprecedented and brought not only massive destruction but also the loss of thousands of people’s lives. Yet two-thirds of the staggering USD 370 billion in economic damage will be shouldered by corporations, governments, relief organisations, and ultimately individuals, pointing to the still widespread lack of insurance protection worldwide.”

Had Japan been more fully insured, 2011 would certainly have been the most expensive year ever also in terms of insured losses,” says Lucia Bevere, Swiss Re Senior Catastrophe Data Analyst and co-author of the study. In New Zealand, where earthquake insurance penetration is high, particularly for residential properties, the February earthquake (Mw 6.3) – the third most expensive in history – triggered further insurance claims of USD 12 billion, covering 80% of economic losses.

The floods in Australia, the country’s worst natural disaster ever in terms of losses, triggered insured claims of over USD 2 billion. However, at USD 12 billion, insured claims from the flood in Thailand are the highest ever recorded for a river water flood event. “Flood losses can be just as tremendous as earthquake and storm losses.

The flooding in Thailand is a painful reminder that, given the high risk of flooding in many countries, other parts of the globe could be prone to similar or even bigger losses,” says Jens Mehlhorn, Head of Flood Perils at Swiss Re and co-author of the study. Mild hurricane season caps high US insured losses In addition to earthquakes and floods, an unparalleled tornado season in the US caused insured catastrophe losses of over USD 25 billion.

“Despite the exceptional tornadoes and Hurricane Irene, a relatively moderate hurricane season kept overall insured losses in the US lower than the record year of 2005, the year in which hurricanes Katrina, Wilma and Rita contributed the lion’s share of that year’s total global claims of USD 123 billion,”

The insurance industry weathered the events well The insurance industry proved highly effective in weathering the extreme events of 2011. Despite historic losses and a challenging financial environment, the industry played a key role in post-disaster recovery financing, bringing much-needed funds to affected populations, businesses, and governments.

The events, however, revealed increasing risk accumulation, particularly in emerging markets. “To support the industry going forward, Swiss Re will enhance its CatNet® information system by including more detailed river flood hazard zones. The update, to be released in spring 2012, will enable underwriters and risk managers to more accurately assess flood risks on a global level,” adds Mehlhorn. sigma on natural catastrophes and man-made disasters in 2011 | Swiss Re – Leading Global Reinsurer

The sigma study, “Natural Catastrophes and Man-Made Disasters in 2011” notes that losses mounted from the Thailand event because many international companies over the last decade have invested heavily in Thailand, setting up branch offices or building assembly and manufacturing plants there.

Industries such as car manufacturers and high-tech manufacturing and electronics all suffered losses, and Swiss Re says the floods highlighted the importance of supply chains when calculating an industry’s risk exposure.

The study says, “Companies’ direct investment in foreign countries is increasing, and with it the exposure to foreign local catastrophe risks.”

Turning to other markets with similar growth in economic development, the sigma study says China tops the list for the highest flood risk in emerging markets, followed by the other BRIC nations (Brazil, Russia and India).

Thailand, despite having the highest ever flood insured flood losses so far, ranks seventh, according to Swiss Re.

“Surprisingly, Kazakhstan and Azerbaijan are among the top 10,” the study says. “Both experienced recent high economic growth and increasing foreign investment, particularly in the oil and gas sectors.”