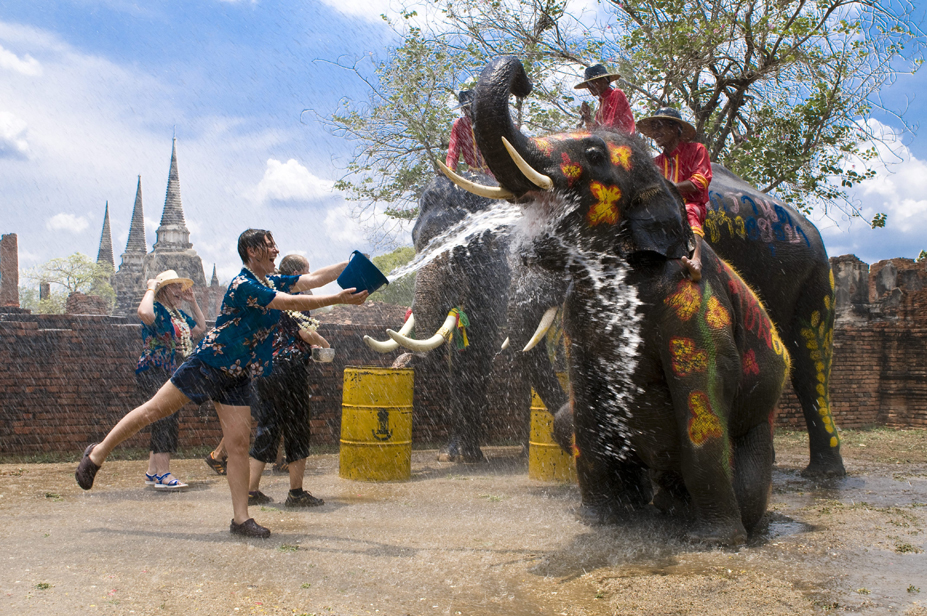 Songkran can be fun in Thailand, even for grumpy expats, if you just take some extra precautions before heading to your favorite venues. Unless you intend to go out in a bathing suit, you should carry all your stuff and valuables in a waterproof tightly sealed plastic bag. As a matter of fact I always recommend Songkran as a healthy occasion to test how long you can stay without checking your mobile/iPhone/Galaxy etc… Having it wrapped in a not so easy location to reach, like a sealed plastic bag will probably put a lid on your urge to read your mails/Tweets/SMS etc…  every 10 minutes, or to post a picture on your Facebook account.

Songkran is originally a Buddhist celebration and an occasion to pay respect to elderly people (over 60 according to Thai tradition), but during the recent years it has been transformed in a ruthless water war by Thai and foreigner revelers, throwing buckets of ice cold water sometime in a very rude manner, along with drinking anything BUT water…

The normally quiet and respectful Thais go a little crazy at Songkran and arm themselves with water guns, hoses and buckets to soak anyone and everyone they see. If you go out on the street for the 3 to 4 days of the festival you most certainly will get wet and perhaps be smeared with white powder. Try to keep your temper and smile. Unlikely as it seems this is part of the ancient tradition of paying respect to elders.

The Tourism Authority of Thailand (TAT) invites visitors from all over the world to enjoy the “Songkran Splendours Festival,” which highlights the many traditional celebrations that take place during Songkran, the festival marking the Thai New Year. The Songkran Splendours Festival offers a range of exciting and engaging cultural events that will take place in Bangkok and 12 history-rich cities across Thailand from 9 to 24 April 2012.

“Songkran is the annual festival that all Thais look forward to, as it brings together families and friends to celebrate the Thai New Year by honouring their elders, while relieving the summer heat by joyfully splashing each other. It’s a uniquely Thai combination of honouring ancient traditions while having a good time together, which makes the Songkran Festival popular with visitors who want a memorable Thai experience,” said Mr Suraphon Svetasreni, Governor of the Tourism Authority of Thailand.

The Songkran Festival is based on ancient traditions that recognize the importance of family ties and the progression of life by honouring family elders. Meaningful cultural ceremonies that take place throughout the country also engage communities and welcome visitors to take part.

A word with roots in the Sanskrit language, “Songkran,” means “move into.” Historically, it marked the end of a twelve -month cycle and the beginning of a new solar year. Water plays a major role in the Songkran Festival, symbolizing the cleansing and purification process.

Communities throughout Thailand really come to life during the Songkran Festival. Cultural traditions include cleaning temples, making merit with monks, bathing Buddha statues and images with scented lustral water to show respect, and decorating temple grounds. Many communities also feature parades, street parties and other events that offer visitors to Thailand a chance to immerse themselves in Thai culture in a fun and fascinating way.

Highlights of the Songkran Splendours Festival and the 13 provinces include:

Songkran Festival in the Capital include pouring scented water on Buddha images, sampling delicious Thai cuisine, and enjoying cultural performances at Nagaraphirom Park during 10-15 April 2012, from 10.00 to 20.00 hrs. (The Opening Ceremony was held on 9 April 2012).

Songkran is also the perfect time to visit royal temples including Wat Phra Kaeo, Wat Pho, Wat Arun (The Temple of Dawn), Wat Ratchaorasaram, Wat Ratchaphradit, Wat Ratchabophit, Wat Bowornniwet, Wat Suthat, Wat Phraram Kao, Wat Chanasongkhram, Wat Saket (The Golden Mount), Wat Rakhang, and Wat Kanlayanamit. Visitors can also join in the Songkran Festival activities at Rattanakosin Royal Square, as well as in the neighboring areas including Bang Lamphu, Khao San Rd., Phra Athit Rd., Santhichaiprakan and Wisut Kasat. From 9 to 17 April 2012, from 10.00-18.00 hrs., visitors should go to the information booth at each temple to receive a souvenir passport for collecting a stamp from each location. Once the passport is filled with stamps, visitors can receive a special gift at Wat Pho.

Dusit Thani Bangkok will be awash with the spirit of Songkran from 13th until 15th April 2012.

A booth will be erected in front of the hotel at our Silom entrance with a choice of drinks and food items as well as water guns, refreshing towels, music, laughter and great company.Skewered chicken and pork and German Sausage with potato salad, hot dogs and sandwiches as well as soft drinks and draught beer are just a few of things on offer for Songkran revellers who choose to stop by.  The tent will be open from noon until midnight from 13th until 15th April 2012. Dusit Thani Bangkok would like to wish everyone out there a very happy and safe Songkran.

Chiang Mai is renowned for holding one of the grandest Songkran celebrations in Thailand. Visitors can participate in the Opening Ceremony for the 2012 Songkran Festival by joining in the wonderful procession that takes place around Chiang Mai city. They can also pour scented water on a Buddha image and willing elders, delight in cultural performances and traditions that reflect the Northern style and enjoy a variety of foods available along the streets.

There are four key venues for the Songkran festival in Chon Buri province, which are Ko Si Chang, Wan Lai Bang Saen, Wan Lai Pattaya, and Si Maha Racha. The “Kong Khao” religious ritual, which is also related to the Thai New Year, includes a procession of ‘kong khao’ floats and Buddha images, plus the ritual bathing of Buddha images. Visitors should also make sure they see the tradition of local men carrying a lady to the sea and back at Ko Si Chang, which is followed by a folk dance.

Khon Kaen lies in the heart of the Northeast. Here, visitors can experience the longest human wave in the world and take part in the water splashing on “Sticky Rice Streetor Khao Niao Street” and watch the Flora Cart and Songkran Procession that starts out from Fountain Park. There is also a variety of entertainment to choose from; a mountain bike competition, volleyball tournament, petanque competition for the Royal Cup from HRH Princess Sirindhorn, cooking contest, OTOP product fair, folk plays, and a food fair at Kaen Nakhon Lake in Khon Kaen.

Visitors to this southern province can participate in the Songkran festivities by bathing the Phra Phuttha Sihing image. Other highlights include the Nang Kradan procession and a Swing Ceremony to welcome the god Shiva. Exciting activities will take place at Wat Phra Borom That and Si Thamma Sokarat Park, Sanam Na Muang, Phra Isuan Hall, and Phra Narai Hall.

At Sai Thong Sri Kottabun Beach in Muang District and Renu Nakhon Municipality, Nakhon Phanom, visitors can join in a Buddha image bathing ceremony at the birthday pagoda. To encourage good fortune, they can pour some flower-scented water on the seven pagodas that signify the seven days of birth. Other activities include creating a sand pagoda and participating in the Buddhist ceremony, and making offerings to Phra That Si Khottabong in Lao PDR. For a special cultural experience, visitors can join in making a sand sculpture that is believed to bless people with good health, as well as watch a procession done in the Renu Nakhon tradition.

Visitors will find the beautiful procession at Wat Pho Chai enchanting and can see water being sprinkled on the sacred Luang Pho Phra Sai Buddha image in Nong Khai province. Of course, there is plenty of water splashing, while the cultural heritage of the Mekong River area is celebrated through ethnic performances and entertainment.

In Thailand’s ancient capital, Songkran celebrations take place at various sites around the Phra Nakhon Si Ayutthaya City Island. Visitors can experience Buddhist merit-making and join elephants and their mahouts for some Songkran water-splashing fun. Mon Songkran Celebrations will also be held at Wat Tong Bo in Sao Kradong in the Bang Pa-In district of the province. For great photo opportunities, visits should not miss the procession of swan and centipede flags, as well as the Mon-style Buddha image bathing ritual.

This is one of the few places in Thailand that celebrates the Songkran Festival in the Thai-Mon style. The not-to-miss highlight is a magnificent parade. Visitors can learn how to play saba, enjoy a Mon folk play and many other forms of entertainment, and also see a procession of swan and centipede flags.

Visitors can join in a communal Thai New Year merit-making ceremony, witness a procession of Phra Phuttha Sihing Buddha images along Patong Beach, and pay homage to elders with scented lustral water. A range of events will be held at Loma (Dolphin) Public Park and the port, and the Jungceylon activity plaza overlooking Patong Beach.

The Songkran celebration in Sukothai includes a variety of entertainment and performances, a parade, and food fairs at Si Satchanalai district, as well as at the Sukhothai Historical Park, and Thai Phuan Buddhist Ordination on Elephant’s Back at Ban Hat Siao. Visitors who want to truly experience the the roots of traditional Thai culture must not miss exploring this city.

Along Nean Kaeo Road in Suphanburi, in the heart of Thailand’s central region, visitors can enjoy a procession featuring the golden Luang Pho To Buddha Image, along with other processions put together by public and private entities in the province. There will also be folk music performances, a Miss Songkran beauty contest, and water splashing with Suphanburi artists.

The Thai baht rose to 33.94 baht per USD, a record high in the past two years after the Bank of Thailand (BOT) decided not to take measures to stop the rise of the domestic currency. END_OF_DOCUMENT_TOKEN_TO_BE_REPLACED

The world’s six largest pension systems will have a joint shortfall of $224 trillion by 2050, imperiling the incomes of future generations and setting the industrialized world up for the biggest pension crisis in history. END_OF_DOCUMENT_TOKEN_TO_BE_REPLACED