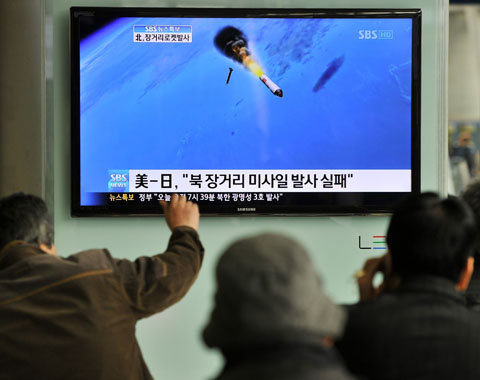 North Korea has acknowledged a multi-stage rocket it launched early Friday failed to reach orbit. An announcer on North Korean television – interrupting programming four hours after the launch, which was not broadcast – says the Kwangmyongsong-3 earth observation satellite did not succeed in reaching orbit and scientific experts are investigating the cause of the failure.

Officials in Seoul, Tokyo and Washington say North Korea’s rocket indeed blasted off from the launch pad but failed to get very far.

U.S. military officials called it a Taepo Dong-2 missile. They say it was tracked by satellite on a southern trajectory where the first stage fell into the Yellow Sea.

South Korean army major general Shin Won-sik, speaking to reporters at the defense ministry, says the missile began tumbling back to Earth at an altitude of 151 kilometers, separating into about 20 pieces and harmlessly falling into the Yellow Sea 100 to 150 kilometers offshore.

The general says the launch clearly violates UN resolutions 1718 and 1874 and was a test-firing of a long-rang missile disguised as a satellite launch. He adds this is a grave provocation and a serious military threat to international society and the Republic of Korea.

Japan’s defense forces, along with the South Korean and U.S. militaries in the region, had deployed anti-missile batteries on land and at sea to possibly shoot down the object if it flew over Japanese or South Korean territories.

Authorities in Japan’s southern Okinawan islands, which are close to the intended flight path, activated public address loudspeakers soon after the launch.

Citizens were advised that there was nothing to worry about from the North Korean missile launch while newspaper vendors handed out copies of extra editions.

The incident prompted emergency security meetings both in Seoul and in Tokyo.

The U.N. Security Council is to add an agenda item about North Korea to its already scheduled Friday session.

The Group of Eight nations  – composed of the United States, Russia, Japan, Germany, the France, the United Kingdom, Italy and Canada – are calling for the United Nations to make an appropriate response to Pyongyang’s action.

Kim says it is truly regrettable that North Korea spends huge financial resources on developing nuclear weapons and missiles while its citizens are experiencing such hardships.

There is growing speculation in the intelligence community that North Korea will soon conduct a third nuclear test. Such underground explosions of nuclear devices followed its two previous attempted launches of multi-stage missiles.

The Thai baht rose to 33.94 baht per USD, a record high in the past two years after the Bank of Thailand (BOT) decided not to take measures to stop the rise of the domestic currency. END_OF_DOCUMENT_TOKEN_TO_BE_REPLACED

The world’s six largest pension systems will have a joint shortfall of $224 trillion by 2050, imperiling the incomes of future generations and setting the industrialized world up for the biggest pension crisis in history. END_OF_DOCUMENT_TOKEN_TO_BE_REPLACED