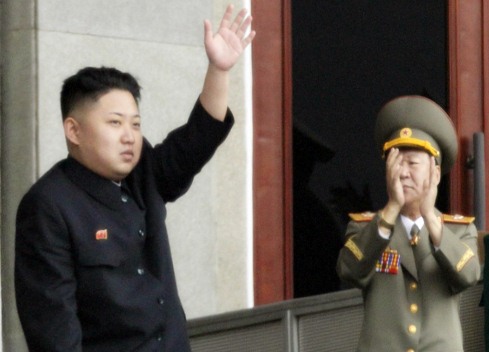 On Friday, the council issued a brief condemnation of the rocket launch that lasted a few minutes and ended in embarrassment for Pyongyang when the missile burst into pieces and rained down over the Yellow Sea.  But the Security Council warned that it was not done addressing the matter.

Early Monday, the most powerful U.N. body convened and adopted what is known as a presidential statement, which has the backing of all 15 members, including North Korea’s ally, China.

U.S. Ambassador Susan Rice, who heads the council this month, told reporters that if North Korea chooses to again defy the international community, the Security Council will act accordingly.

“The swift and unanimous adoption of this strong presidential statement shows that the international community is united in sending a clear message to North Korea that such provocations are serious and totally unacceptable.  Critically, the Security Council made clear that there that will be consequences for any future North Korean launch or nuclear test,”

She said the council will impose additional sanctions as a result of Pyongyang’s failure to comply with existing Security Council resolutions.

“To ensure that there is a consequence for North Korea’s launch, this PRST [presidential statement] also provides for new sanctions.  The Security Council directed its North Korea sanctions committee to designate additional North Korean entities, including companies, to be subject to an asset freeze, as well as to identify additional proliferation-sensitive technology to be banned for transfer to and from North Korea, said Rice. “The committee will also take several other actions to improve enforcement of existing sanctions.”

Ambassador Rice said the United States would be among countries proposing a “robust package” of new designations to the sanctions committee in the coming days.

But a U.N. analyst with the Century Foundation, Jeffrey Laurenti, does not think the modest tightening of sanctions alone would significantly change North Korea’s behavior.

“The one hope against hope, is that in this crucial moment in North Korea’s own internal political transition, that a signal that even China is aboard a tightening of the screws could lead the newly-ratified Kim Jong Un to reassess whether reliance on the militarist side of the regime is his best long term strategy for survival,” noted Laurenti.

The council also called on North Korea to immediately comply fully with existing council resolutions, including that it abandon all nuclear weapons and existing programs in a “complete, verifiable and irreversible manner.”  The council demanded that North Korea not conduct any further launches that use ballistic missile technology, conduct any nuclear tests or carry out any “further provocation.”

In 2006 and 2009, North Korea followed rocket launches with nuclear tests.

The Thai baht rose to 33.94 baht per USD, a record high in the past two years after the Bank of Thailand (BOT) decided not to take measures to stop the rise of the domestic currency. END_OF_DOCUMENT_TOKEN_TO_BE_REPLACED