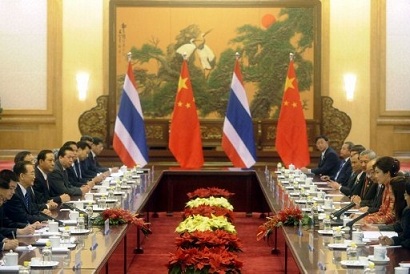 The governments of Thailand and the Peoples Republic of China on Tuesday agreed to upgrade their strategic cooperation in all aspects during an official visit to China by Thai Prime Minister Yingluck Shinawatra.

The Thai premier arrived in China Tuesday afternoon, as part of her three-day visit at the invitation of Chinese Premier Wen Jia Bao. She was greeted by an official welcoming ceremony at Peoples Pavillion.

The Thai premier then met with her Chinese counterpart, and both leaders witnessed the signing of agreements by officials of their countries.

Thai News Agency reported that they agreed to elevate their countries’ strategic partnership in all areas, particularly sustainable development in four fields including the provision of tablet computers for Thai elementary school students, cooperation in building a high speed railway,  water management and clean energy.

The Thai premier invited Chinese investors to invest in the kingdom in natural rubber, auto parts, biofuel and wind energy, as well as proposing that both countries develop the ecotourism industry.

Ms Yingluck invited the Chinese premier to attend the World Economic Forum scheduled to be held in Bangkok May 30 through June1. The Thai prime minister is scheduled to attend a state welcome dinner hosted by the Chinese government tonight. MCOT online news

China is one of Thailand’s major trading partners. Thai-Chinese trade amounted to 64.7 billion US dollars in 2011. Both countries are seeking ways to achieve the bilateral trade target of 100 billion dollars by 2015. Chinese tourists visiting Thailand in 2012 is likely to reach two million against 1.7 million recorded in 2011. Bangkok, Pattaya, and Kanchanaburi have been listed as popular tourist destinations among Chinese visitors to Thailand.

Thai Chinese relations remain close and cordial and are moving forward rapidly and smoothlyin all key areas, including trade, investment, tourism, science and technology, health, educationand culture. Trade and investment, in particular, are the two areas that have seen the mostrapid expansion.

China is our 2nd largest trading partner, while Thailand is China’s 14thlargest. This makes China an important market for Thailand. At the same time, China is also animportant investment source for Thailand. Chinese investors regard Thailand as an attractive investment destination in many fields, including infrastructure, agricultural and alternative energy.

said Prime Minister Yingluck Shinawatra in her interview with the ChinaDaily.com
Thailand believes that the cooperation on patrol in the Mekong River by itself cannot bringabout sustainable safety and security for riverine traffic. All 4 participating nations must furthercooperate to address the root causes of the issue by ensuring the continuous enforcement ofrelevant laws in other areas, particularly on combating transnational crime on the Mekong Riversuch as the trafficking of narcotic drugs, weapons and humans, and illegal immigration. Areas adjacent to the banks of the Mekong River should be jointly developed by all sides in order toimprove living standards of the people in the area.

Guan Mu, China’s ambassador to Thailand, said earlier that Thailand plans to buy 800,000 computer tablets from China, according to The Nation, a Bangkok-based English-language daily newspaper.

“In the next 10 to 15 years, Thailand will have road and rail connectivity with neighboring countries. It will totally change the country and greatly benefit Thailand,” Guan was quoted as saying.

Yingluck thanked China for its help and support to Thailand in fighting floods, disaster relief and reconstruction.

China offered emergency humanitarian aid to Thailand during last year’s flood, which included $1 million in cash remittances and $1.57 million worth of relief materials, according to the Ministry of Commerce.

Thailand is ready to increase strategic communication with China and boost communication and cooperation in all areas, Yingluck said.

Thailand will complete judicial procedures concerning the killings of Chinese sailors on the Mekong River as soon as possible, and severely punish the criminals according to the law, she said.