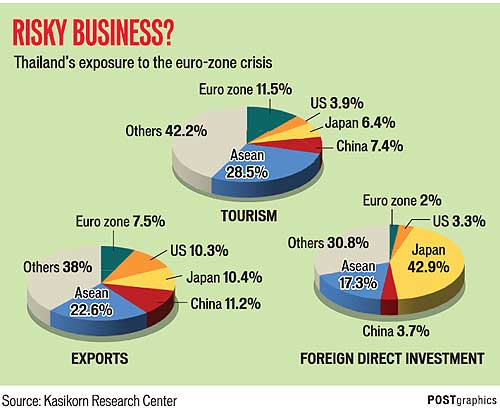 As the public debt crisis in Greece spreads to other countries in Europe, risks to financial markets and uncertainty over the recovery of the global economy have risen. Although Thailand possesses strong economic fundamentals and is not directly linked to the ongoing debt crisis, increasing globalization and integration may affect Thailand via trade or financial linkages.

Eurozone represents only a fraction of Thailand’s exports (7.5%) and tourism (11.5%) and is almost non existent in FDI

The euro-zone crisis could shave 150 billion baht off Thailand’s export revenue in the worst-case scenario, so exporters should try to price their goods competitively, says the University of the Thai Chamber of Commerce (UTCC).

Aat Pisanwanich, dean of the economics faculty, said Thai shipments to EU countries were worth 700 billion baht last year or 10% of the total.

Standing to be hardest hit are rubber and related products, electrical appliances, gems and jewellery, and garments.

As well, Thailand’s tourism industry could see a drop in the number of visitors from the euro zone.

There is no need for the Bank of Thailand (BoT) to lower its key interest rate, unless impacts from the euro zone debt crisis become worse than anticipated and inflation as well as the gross domestic product (GDP) is not within the anticipated range.

Narongchai Akrasanee, a member of the BoT Monetary Policy Committee (MPC) said that inflation is likely to be around three per cent as projected by the Bank of Thailand, obviously favoured by dropping global oil prices.

The National Economic and Social Development Board (NESDB) assessed the impact of the euro zone debt crisis and remains confident that the Thai economy will grow 5.5-6.5 per cent. The MPC applied the monetary policies to oversee the inflation along with the economic growth rate.

Apart from trade linkages, the Thai economy is also exposed to another transmission channel, namely international financial linkages. In terms of the direct exposure, risks arising from the effects of the Euro zone public debt crisis to Thai financial institutions are low; foreign assets, including deposits, investments in debt securities, and loans account for only 2.81 percent of Thai commercial banks , total assets.

Moreover, loans to Greek corporations amount to only 371 million baht. However, the Thai economy may be exposed to additional risks from the indirect effects of deteriorating investors , confidence, which increases global financial market volatility and in turn affects Thailand via the following three sub-channels.