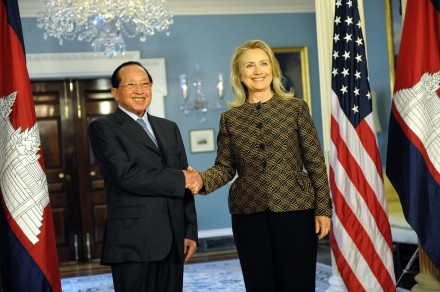 Last week, Barack Obama was re-elected to serve a second term as president of the United States. President Obama’s first trip abroad since his re-election will be to Southeast Asia from November 17-20 to attend the East Asia Summit (EAS), the regional grouping of 18 Asian-Pacific nations, including the United States, held in Cambodia’s capital, Phnom Penh.

Mr. Obama’s visit will make history as the first time a U.S. president has ever visited Cambodia.

Underscoring the president’s attendance at the EAS will be his visits to Thailand and Burma (also known as Myanmar). President Obama’s trip to Thailand will commemorate 180 years of uninterrupted diplomatic ties, making it the oldest bilateral relationship the U.S. has with any Asian nation.

Conversely, until recently, U.S. relations with Burma had been one of the prickliest of any country on earth. Despite criticism in human rights circles, President Obama’s trip to Yangon is meant to recognize and encourage the recent democratic reforms that have been taking place in that country after 50 years of harsh military rule.

In 2011, the Obama administration announced that the U.S. needed to make a “strategic pivot” (later rephrased as a “rebalancing”) in its foreign policy, where over the next decade the dynamic will be to downsize the U.S. presence in the Middle East and Afghanistan, and to invest more and pay greater attention to the Asia-Pacific, particularly Southeast Asia.

Southeast Asia’s cumulative economic, political, and demographic weight is growing. With a combined population of more than half a billion people and a GDP of $2 trillion, these countries have embarked on a drive through the Association of Southeast Asian Nations (ASEAN) toward effective regional integration and connectivity by 2015.

Learning to be Thai : a US student point of view

The Thai baht rose to 33.94 baht per USD, a record high in the past two years after the Bank of Thailand (BOT) decided not to take measures to stop the rise of the domestic currency. END_OF_DOCUMENT_TOKEN_TO_BE_REPLACED