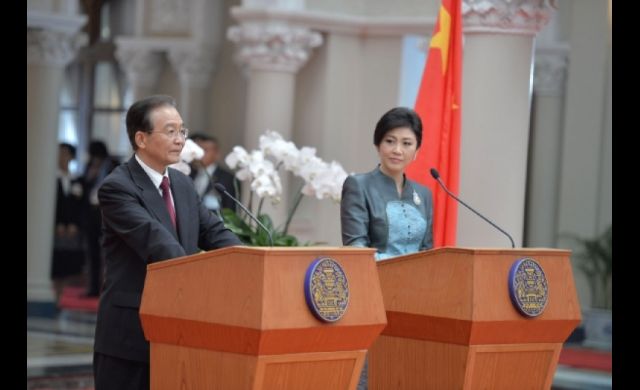 Thailand and China today signed four MoUs aimed at strengthening the diplomatic relationship between the two countries, exchanging ratifications on the transfer of convicts, and cooperation on educational development and rice trading.

Ms Yingluck said both countries agreed on enhancing their relationship and expanding cooperation on investment, education and tourism including the opening of additional aviation routes to facilitate travellers.

“China was asked to import agricultural produce including rice, tapioca and rubber from Thailand. One of the MoUs touched on Thailand’s rice export to China,” the Thai premier said.

She added that China was also invited to invest in major projects such as the Dawei deep sea port on Thai-Myanmar border, a high-speed train and a disaster prevention system while Bangkok is keen on exporting ethanol to Beijing.

China has offered to host a joint economic forum on trade and investment, she said. Mr Wen complimented Thailand on its economic revival and pledged to support Thailand in every aspect for regional stability.

China is Thailand’s second-largest trading partner after Japan. The Chinese premier arrived for a two-day visit to Thailand on Tuesday as part of a regional tour before he steps down next year. (MCOT online news)

On the occasion of this visit, Mr. Wen, together with Prime Minister Yingluck, will preside over the opening ceremony of the Chinese Cultural Center at 9:00 a.m. on 21 November. The Chinese Cultural Center is located on Ratchadaphisek Road in Bangkok. Construction of the center began in 2010 and was completed in May 2012. The center consists of a theater, an exhibition hall, a library, and classrooms to provide the public with Chinese cultural activities in Thailand, as well as training and information services. It aims to promote better understanding about Chinese culture, cultural exchange, and friendship between the two countries.