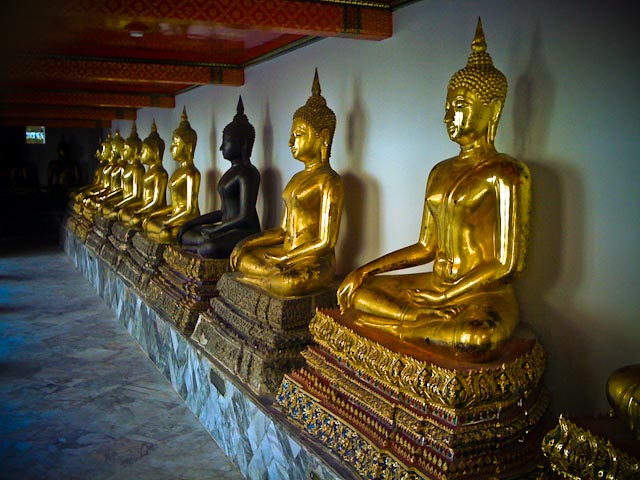 Tourists are rushing to Thailand no matter what : everybody has quickly forgotten civil war in the street of Bangkok in 2010, and horrendous flooding in 2011 that left more than 800 people dead. In 2012 Thailand enjoyed its first period of prolonged calm after massive flooding  and years of political unrest and Chinese tourists are flocking to the kingdom of smiles.

An estimated 22 million tourists visited Thailand last year, the most ever for the kingdom and a more than 15% increase from 2011, thanks mainly to a massive 60% increase in Chinese visitors. According to the Tourism Authority of Thailand, authorities hope to welcome nearly 25 million tourists in 2013, generating more than $38 billion in revenue for the country.

In terms of travel and tourism, China has emerged as a fast-growing tourism market in recent years. The World Tourism Organization predicts that the number of overseas trips made by Chinese people will surge from 72 million this year to 100 millions by 2020. The number of outbound tourists was five million 15 years ago. China will become the largest tourist generating country and among the largest for overseas travel in 2020.

Chinese people are more interested to visit and explore different parts of the world due to their high level of income. It is estimated that Chinese tourists are the biggest spenders in overseas travel and the Chinese travellers overseas spent $54 billion in 2010 and $72 bn in 2011. The high economic growth and transformation has encouraged the people to travel around the world. China possesses a vast terrain, splendid landscapes, rich cultures, multiple nationalities, ethnic communities, diversity of cuisines and exquisite arts and crafts.

Europe and the US markets  posted double digit growth, +10.12% and +13.4% respectively. However, there are clear indications that the European markets could decline in 2013.

The Middle East was the only region with a marginal growth of 0.58%. The region’s key supplier, Isarael and UAE only improved 3.27% and 4.2% respectively.

In December alone Thailand tallied 2,384,627 international arrivals, a significant increase of 30.37%. The high growth was partly due to the low base in 2011 when tourism declined due to fears of a flooding in the Thai capital.

The stronger baht has not flustered the tourism scene so far, but operators are monitoring the situation closely so that they can make adjustments to cope with any change in the business environment.

“I don’t think that its appreciation right now is a risk for the tourism outlook. I believe tourism operators can survive at the existing rate,” Yutthachai Soonthronrattanavate, president of the Association of Domestic Travel, said yesterday. “But if it keeps getting stronger, they will look for ways to sell their services.”

A survey shows that Thailand has been rated the most attractive tourism destination in the ASEAN region, according to the eyes of international tourists.

The survey was conducted by Bangkok Poll of Bangkok University on 11-13 January 2013 to gather information for the ASEAN Tourism Forum in Vientiane, Laos, scheduled for 17-24 January 2013.

It was carried out among 686 foreigners traveling in Bangkok. They came from Europe, the Americas, Oceania, Asia, and Africa. A total of 58 percent of the respondents to the survey voted Thailand as the number one ASEAN tourism destination, followed by Vietnam, at 34.1 percent; Cambodia, 30.6 percent; Laos, 30.3 percent; Singapore, 26.1 percent; Malaysia, 25.8 percent; Indonesia, 24.3 percent; Myanmar, 20.6 percent; Philippines, 19.5 percent; and Brunei Darussalam, 3.9 percent.

Asked about the factors that damage the tourism atmosphere in Thailand, 37.2 of the respondents cited traffic congestion, 23.2 percent cited unfair fares charged by tuk tuk taxi drivers, and 20.7 percent cited overpriced products. However, 60.5 percent said that they found Thailand better than they had expected before coming, and 37.6 found the country the same as they had expected.

Latest statistics show that international tourist arrivals in Thailand in 2012 reached 22 million, surpassing the set target of 19.5 percent, an increase of 15 percent over the previous year. In recent years, the Tourism Authority of Thailand (TAT) has actively promoted Thailand as a high-quality destination, targeting new markets and offering new niche products, such as health and medical tourism, agro-tourism, Thai cookery courses, and international conventions and exhibitions.

However, Bangkok rated best in two very important categories of the visitor experience, shopping and value for money. Tourism Authority of Thailand Governor Suraphon Svetasreni said, “This is a very important result for us because it underscores the success of our marketing campaign. We have always sought to position Thailand as a shopping paradise, thanks to our value for money factor and extensive diversity of products and services.”

Thailand recorded a 31% increase in tourism receipts in 2011 over 2010, according to Ministry of Tourism and Sports figures. The total earnings of 776 billion baht (US$ 25.45 billion) were also well above the original target of 716 billion baht (US$ 23 billion). Visitor spending per capita per day in 2011 averaged 4,187 baht, of which 24% (1,001 baht) was spent on shopping, the second highest expenditure item after accommodation.

The Thai baht rose to 33.94 baht per USD, a record high in the past two years after the Bank of Thailand (BOT) decided not to take measures to stop the rise of the domestic currency. END_OF_DOCUMENT_TOKEN_TO_BE_REPLACED