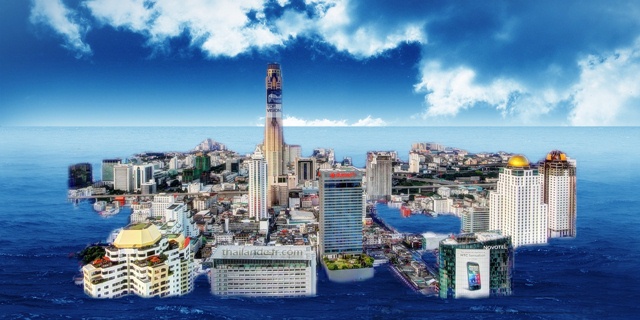 Successive Bangkok governments have invested billions of baht in building embankment systems and used several other means to protect the heart of Bangkok. However, surveillance results from Thaichote, the first Thai earth observation satellite has revealed interesting results which shows that Bangkok and its vicinity could be sinking even faster than earlier predicted.

More alarmingly, future floods could be worse than the one which was experienced back in 2011.

The data analysis room is used to decipher all the trends and data collected via the satellite system, as well as acting as a headquarters in receiving information gathered from other sources. Recent evidence suggests that Bangkok and six surrounding provinces in the lower Chao Praya river basin are most prone to flooding, as a result of the rising sea level as well as erosion.

“There will be similar issues occurring in the future, precisely in the next ten years or so. There is a high chance but as long as proper mechanisms are in place, including sound management systems, then the consequences may be less severe. But that flood in 2011, wasn’t the worst,” said Anon Sanitwong Na Ayuttaya (Director of the Geo-Informatics and Space Technology Development Agency (GISTDA)).

“If changes are made within the next five years, major floods can be prevented. There are several options, several technologies available. For instance, 1) to not do anything at all, 2) to relocate cities to other areas, 3) to create satellite cities, 4) to build ducts around the cities like in the Netherlands. and 5) to reclaim land and practically cover up the Gulf of Thailand area,” he said.

Despite all these changes that need to be done, the director of GISTDA views it is an imperative to genuinely include local voices and opinions in the decision-making process. An exchange of information and input must be incorporated to ensure that their voices are heard. Most importantly, to ensure changes are sustainable, local voices must be recognised, instead of solely focusing on serving mainstream politics. (MCOT online news)

Given the damage done by last year’s floods to the Thai economy, to the government’s legitimacy, to people’s health, and to the country’s long-term attractiveness to investors, one might think that this year Bangkok would be better prepared for flooding.

After all, though some meteorologists attributed last year’s floods to a once-in-decades event, the fact is that Thailand is one of the countries in Asia most exposed to negative impacts from climate change: Bangkok is built on swampy, reclaimed ground, and sinks into the water more and more every year. It is easily flooded, and even in “good” monsoon seasons water often accumulates in the lowest parts of the city.