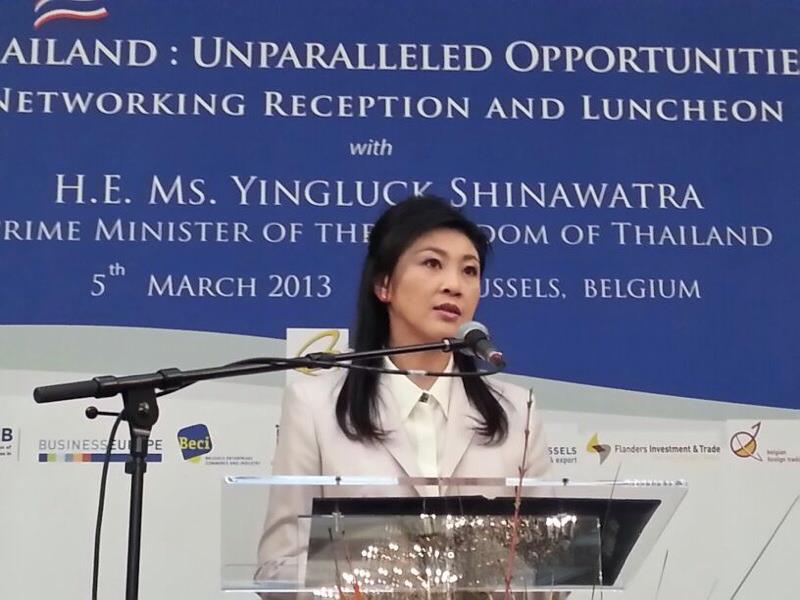 Thai Prime Minister Yingluck Shinawatra is on a trip to Europe where she has urged the Belgian private sector to take part in investment in Thailand’s mega infrastructure projects. The Prime Minister has assured Swedish investors about Thailand’s vast investment opportunities under the government national development strategies towards the emergence of ASEAN Economic Community (AEC) in 2015.


Thai PM Yingluck is on official visits to Sweden & Belgium during 4-7 March to promote Thailand among Europeans investors. During a meeting with her Belgian counterpart Elio Di Rupo, the Thai premier said Thailand has enjoyed political and economic stability, and a gross domestic product (GDP) growth of 6.4 per cent.

Investment opportunities are vast in Thailand given its potential as a gateway for European Union countries to the Southeast Asian region and the US$66 billion mammoth Thai government projects involving transport, telecommunications and energy, she said.

She asked the Belgian prime minister to consider Schengen visa waivers for Thai passport holders to promote tourism between the two countries. Ms Yingluck made a similar request to the Swedish leader during her visit to Stockholm yesterday.

Ms Yingluck said the March 17-22 visit to Thailand by Crown Prince Philippe of Belgium and the Belgian business community will strengthen the relationship between the two countries.

A joint action plan may be signed during the Crown Prince’s visit to enhance bilateral cooperation in various aspects.

Later today Ms Yingluck is scheduled to meet with Jose Manuel Barroso, European Commission president when they will announce the enforcement of the Thai-European Union Free Trade Agreement.

The Prime Minister has assured Swedish investors about Thailand’s vast investment opportunities under the government’s national development strategies towards the emergence of ASEAN Economic Community (AEC) in 2015.

At the event, the Thai Premier has spoken to the participants about the country’s political stability and strong economic condition, which she assured, will continue under the national development strategies to help it become the connecting hub of ASEAN.

PM Yingluck stressed that such plans are offering various investment opportunities, in which Thailand and Sweden can mutually be benefited.

The Premier added that, while last year’s GDP growth was at 6.4%, the Thai government is determined to maintain the growth rate at 4-5% over the long term while working hard to promote the country’s agricultural and industrial sectors.

The Thai baht rose to 33.94 baht per USD, a record high in the past two years after the Bank of Thailand (BOT) decided not to take measures to stop the rise of the domestic currency. END_OF_DOCUMENT_TOKEN_TO_BE_REPLACED

The world’s six largest pension systems will have a joint shortfall of $224 trillion by 2050, imperiling the incomes of future generations and setting the industrialized world up for the biggest pension crisis in history. END_OF_DOCUMENT_TOKEN_TO_BE_REPLACED