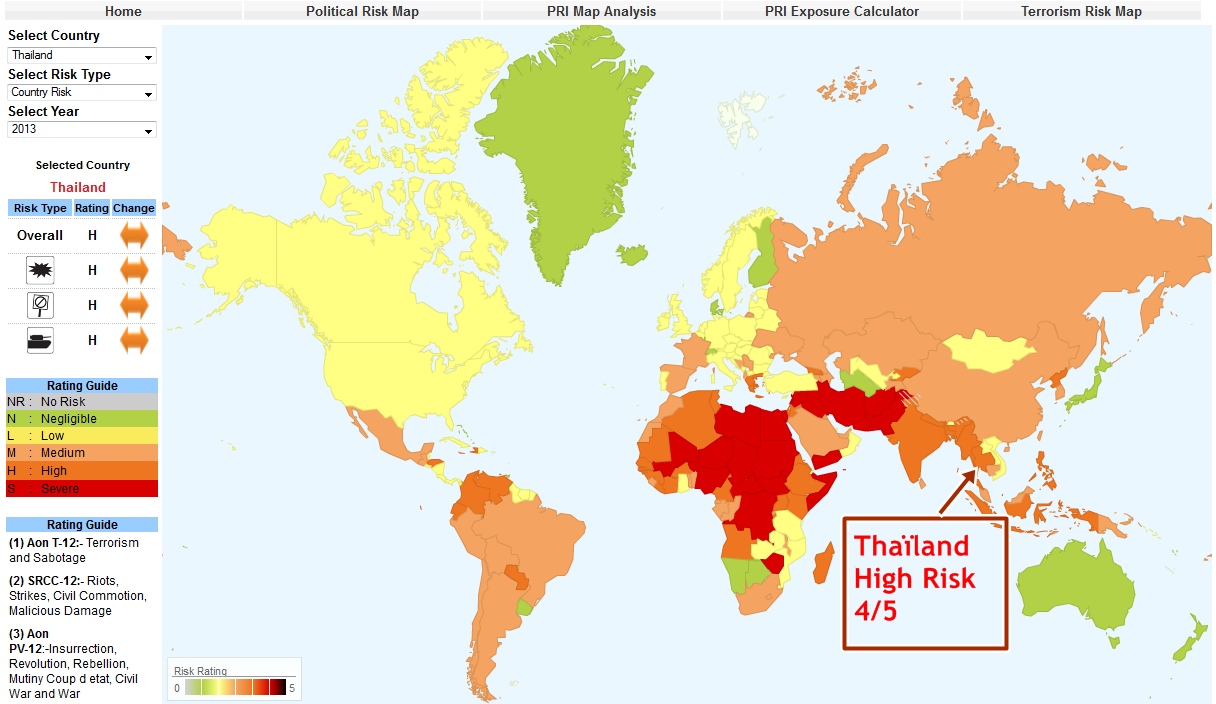 Thailand ranks as the world’s ninth most exposed country to terrorist attacks, according to a report published by a British-based firm specialising in risk management and terrorism insurance.

Near daily attacks by separatist militants occur in Thailands southern provinces of Yala, Pattani and Narathiwat. Despite sporadic pro- and anti-government demonstrations in Bangkok, there has been no return of sustained protest actions in the capital. Tensions over a border dispute with Cambodia persist but no substantial border clashes have occurred.

writes Aon on its Thailand comment attached to the terror index interactive map.

On May 1, 2013, around 8:30 p.m., four insurgents opened fire with assault rifles at a group of villagers outside a grocery shop in Rusamilae sub-district, Muang district, in Pattani province. Two of the attackers then walked over to the victims and shot each of them point-blank in the head. More than 100 casings of M16, HK33, and AK-47 assault rifle bullets were found at the scene. A 2-year-old boy, Jakarin Hiangma, was killed along with his father and four other people.

“Separatist leaders should publicly condemn all attacks against civilians and take steps to make sure that attacks on civilians never happen again.”

Fatoni Fighter brothers, we have avenged you. Four of us were killed. So we took back more [lives] in return. … Six dead bodies in Pattani is a lesson for the Siamese [Thais] to remember that we will kill them all. Children and women will not be spared. … We will do everything to make the Siamese accept our demands.

The stepped up campaign of terror against civilians, including children, may reflect the insurgents’ opposition to a peace agreement signed by BRN elder Hassan Taib on February 28. Under pressure from the Thai and Malaysian governments, the agreements states that negotiations will take place on the basis of the Thai constitution, which means abandoning the armed struggle for independence.

In a previous case, on March 8, four insurgents fired on a group of ethnic Thai Buddhist junior high school students while they were playing basketball in front of Sin Liang Chinese Association in Paluru sub-district, Su-Ngai Padi district in Narathiwat province. Tripat Waruni, 15, was seriously wounded in the hip. Children have also been harmed in unlawful insurgent attacks in commercial and residential areas. On March 21, 9-year-old Nisofian Nisani was killed and 14 people wounded when insurgents detonated a bomb hidden in front of an ice cream shop on Suwanmongkol Road in Muang district, Pattani province.

“Insurgents who explode bombs in urban areas that indiscriminately kill and maim civilians are committing war crimes, which deserve universal condemnation,” Adams said. “The perpetrators of these heinous crimes should be arrested and prosecuted.”

The Thai baht rose to 33.94 baht per USD, a record high in the past two years after the Bank of Thailand (BOT) decided not to take measures to stop the rise of the domestic currency. END_OF_DOCUMENT_TOKEN_TO_BE_REPLACED

The world’s six largest pension systems will have a joint shortfall of $224 trillion by 2050, imperiling the incomes of future generations and setting the industrialized world up for the biggest pension crisis in history. END_OF_DOCUMENT_TOKEN_TO_BE_REPLACED