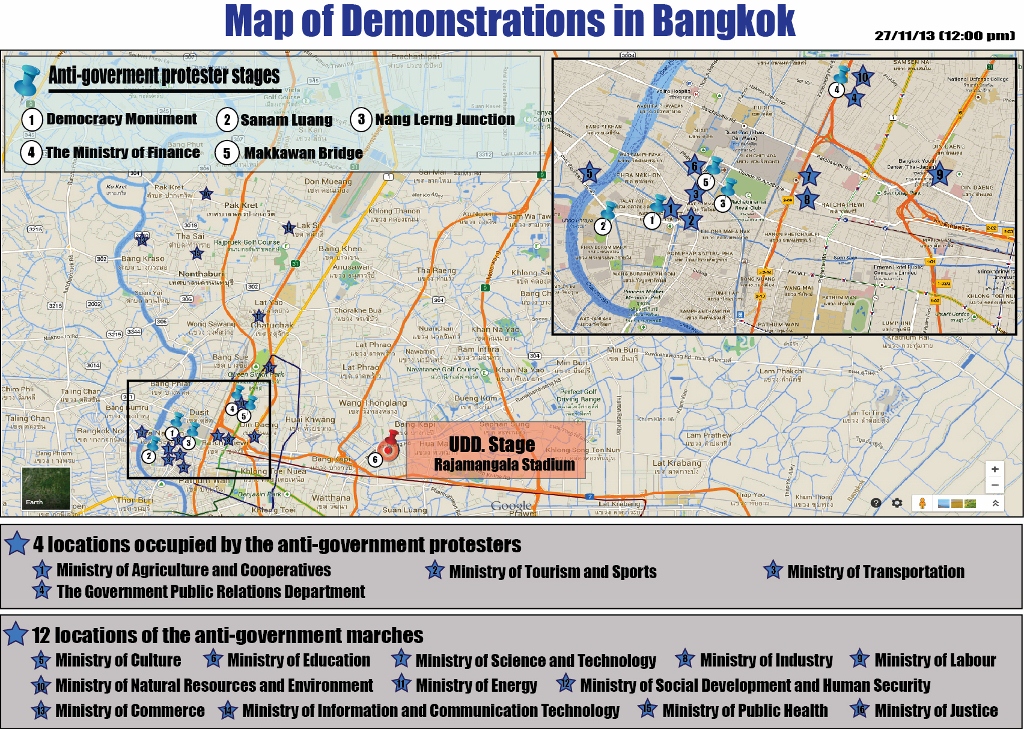 The gathering and marching of the anti-government protesters to various government ministry headquarters may cause heavy traffic en route from Ratchadamnoen Avenue to the following locations:

Meanwhile, the pro-government supporters are staging their campaign at Rajamangala Stadium on Ramkhamhaeng Road. The two main areas occupied by the anti- and pro-government groups are located some 22 kilometres apart.

However, tourists are advised to check travel route and road traffic situation as well as avoid areas where crowds may gather. This is because there may be heavy road traffic at certain times and thus causing inconvenience. The Bangkok Mass Transit Authority (BMTA) has temporarily rerouted 12 city bus routes to avoid getting stuck in the areas where large crowds gather. In addition, given the large number of protesters, roads around or within the vicinity of Democracy Monument, Government House and the Parliament may be temporarily closed to traffic.

Suvarnabhumi Airport has advised air travellers of possible heavy road traffic and a lack of taxis resulting from the protests in Bangkok. Commuters are advised to use public transport such as BTS SkyTrain, Airport Rail Link, public buses and vans, and limousine services. Air travellers are also advised to allocate more time before flight depart or at least three hours.

Life in Bangkok and all other areas of Thailand continues as per normal. Tourist attractions and activities as well as businesses in Bangkok and other provinces are not affected, and continue as usual as seen in these THAI LIVE CAM streaming cameras that present a number of stunning preset views of Thailand’s most famous and popular destinations including Chiang Mai, Ko Samui and Nong Khai.

International and domestic airlines are operating flights between Bangkok and Thai cities, as well as destinations around the world, as per normal.

Tourists need not be alarmed of the presence of security forces and checkpoints in Bangkok. Police are deployed to provide security in the city. Security has been stepped up to prevent ill-intentioned people from inciting violence. Traffic police are also stepping up efforts to ensure traffic flow in the city.

The Thai Government has announced the enforcement of the Internal Security Act (ISA) in all districts of Bangkok and Nonthaburi, Bang Phli district of Samut Prakan and Lat Lum Kaeo district of Pathum Thani until 31 December to maintain law and order.

The law does not prohibit nor obstruct peaceful demonstration held within the bounds of the law, but it enables security agencies – police, military and civilian – to effectively prevent and mitigate, as much as possible, undue disruption or impact on the safety of the general public.

At the end of the Groundhog Day : Bring Thaksin Home

The Thai baht rose to 33.94 baht per USD, a record high in the past two years after the Bank of Thailand (BOT) decided not to take measures to stop the rise of the domestic currency. END_OF_DOCUMENT_TOKEN_TO_BE_REPLACED

The world’s six largest pension systems will have a joint shortfall of $224 trillion by 2050, imperiling the incomes of future generations and setting the industrialized world up for the biggest pension crisis in history. END_OF_DOCUMENT_TOKEN_TO_BE_REPLACED